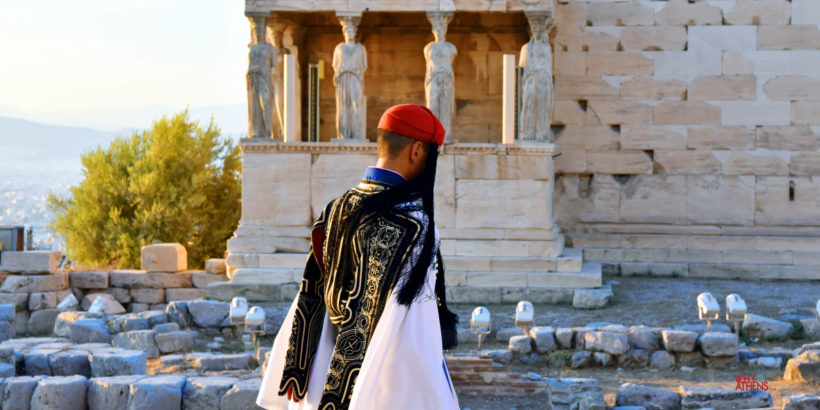 An Evzone in front of the Porch of the Maidens. Photograph: Why Athens | The Acropolis of Athens

The Acropolis of Athens is one of the most famous and influential landmarks in history. The naturally fortified site houses the greatest architectural influence of modern civilisation and symbolises the birthplace of democracy. Whilst there is evidence that the Acropolis was inhabited as far back as 3,500BC, it was Pericles, the democratic leader of Athens in the 5th century BC, who oversaw an ambitious construction program of the buildings and monuments that exist on the Acropolis today. We’ve compiled eight interesting facts and insights you most likely didn’t know about the Acropolis.

The Porch of the Maidens (Caryatids of the Acropolis) Six Caryatid replicas prop up the rear of the Erechtheion. Photograph: Why Athens

The Porch of the Maidens sits at the rear of the elegant Erechtheion constructed between 421-406BC. Directly facing the Parthenon, the maidens were given the name ‘Caryatids’, after the young women from the village of Karyes in Laconia in the Peloponnese. Each year at a festival dedicated to the goddess Artemis, young girls from Karyes would perform a worship dance called the Caryatis. The dance was considered difficult to master and on success they would be honoured with the title of being a Caryatid. The maidens stand 7ft 7in tall and are exact replicas of the 5 originals which are on display at the Acropolis Museum after being removed in 1979 to preserve them from the elements of modern times. The 6th Caryatid was controversially taken by Lord Elgin in the early 1800’s and sits in the British Museum.

The Temple of Athena Nike Nike means victory in Greek and Athena was worshipped as the goddess of victory. Photograph: Why Athens

The Temple of Athena Nike overlooks the entrance to the Acropolis and was constructed during Pericles’ building program in 426BC. The temple was a replacement for a 6th century BC dedication to Athena Nike which was constructed of wood but destroyed by the Persians. It survived virtually intact for 2,000 years, until 1686 when the Ottomans demolished the temple to use the marble as a fortification wall on the Propylaea. The wall was removed and the temple reconstructed to its former glory in 1834 after the Greeks regained their independence. More recently the temple was dismantled again in the late 1990’s and underwent a decade of restoration. All 315 marble sections were reconstructed to the exact formation designed by the temple’s ancient architect Kallikrates. Unlike the famous Nike of Samothrace which is winged (winged victory), Athena Nike was wingless (wingless victory), so that the goddess would never leave Athens.

The flag pole on the belvedere The Greek flag waves proudly above the former belvedere tower. Photograph: Why Athens

The Greek flag which is situated on what was a belvedere tower during the medieval period of the Acropolis, is more than just the best vantage point for photographs across Athens. It was here that on 30th May 1941, the 19 year old Lakis Santas and 18 year old Manolis Glezos, symbolised and inspired the resistance movement in Greece against the occupying Nazi forces of World War II. Scaling the Acropolis through an ancient passage way they had discovered from reading Greek text books, the teenagers tore down the Swastika at night, leaving the flag pole empty in what was one of the first and most famous acts of resistance against the occupying forces. The famous Doric columns of the Parthenon. Photograph: Why Athens

The Parthenon and the surrounding temples have been under an ongoing restoration program since 1983. The Parthenon itself was originally constructed with over 70,000 individual pieces of marble from quarries on Mt Pentelicus northeast of Athens. Such is the precision of the restoration, not only is the restored marble (as differentiated here by its colour) quarried from the same mountain used by Pericles 2,500 years ago, but the shaping, carving, finishing and mating of each individual piece of marble is done so utilising the exact techniques of the ancient sculptors, completely by hand and down to a 1/10 of a millimetre.

The vastness of the Acropolis The vast area of the Acropolis. Photograph: Why Athens | The Acropolis of Athens

When the ancients first saw the rocky land mass which we know as the Acropolis, they must have been amazed by the perfection of its oval top. Measuring 350 metres long and 150 metres wide (52,500 square metres), it must be visited and walked to understand the true scale and uniqueness of the ancient site. Each year over 2 million people climb the Acropolis.

The Evzones on Sunday The Presidential Guard marching in to lower the Greek flag at sunset. Photograph: Why Athens | The Acropolis of Athens

If you are lucky enough to be visiting the Acropolis on a Sunday, and have the resolve to be the first to climb the rock at 8am or the last to leave at its closing time at 8pm (during summer), you will catch a glimpse of the Greek Presidential Guard (Evzones) making their way to the Greek flag on the belvedere. Each Sunday, the Evzones raise the flag in the morning and lower the flag at sunset, accompanied by members of an Athenian marching band playing the national anthem. It’s hug time at the Propylaea. Photograph: Why Athens

The Acropolis evokes an emotional response for many who make the climb. Expect to spend a couple of hours on top of the rock and as you start the descent down through the Propylaea (which is pictured here), the view across Athens is spectacular and a feeling of accomplishment takes hold as you realise you’ve ticked a major item off your bucket list. The Parthenon of ancient Athens. Photograph: Why Athens

The Parthenon is a symbol of classical Greece built during the height of Athenian democracy over 9 years between 447-438BC. Dedicated to the goddess Athena, it is the third Parthenon to occupy the ancient site after the second was destroyed by the Persians in 480BC. It remained unchanged until it was converted to a church during the Byzantine period in the 5th century AD and then a Mosque in the 1460’s during the Ottoman occupation. In the year 1687, the Parthenon was severely damaged by an explosion caused by the ignition of ammunition being stored there by the Ottomans during the Morean war with the Venetians. Sadly like many wonders of the ancient world, much of the Parthenon’s sculptural decoration was looted over time but an impressive collection of artefacts are still in existence and beautifully preserved and presented at the Acropolis Museum.

You can find more information on visiting the Acropolis and some of the best places to photograph it on our Attractions page. 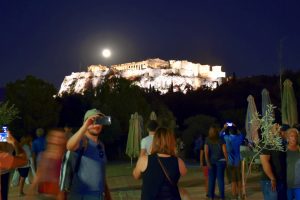 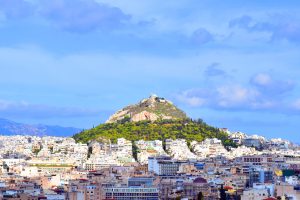