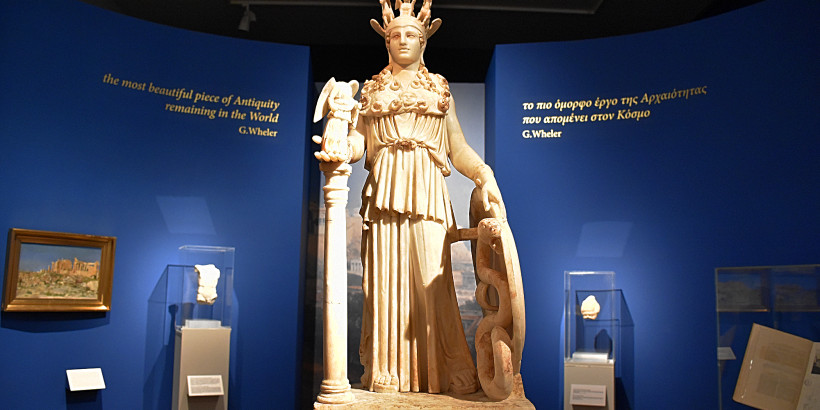 Photograph: Why Athens. The best preserved copy of the cult statue Athena patron goddess of Athens by Pheidias, is depicted fully armed with a winged Nike in her right palm. The original was erected inside the Parthenon in 438 BC
Where: The National Archaeological Museum of Athens
When: Now until 1st October 2016

The National Archaeological Museum of Athens presents A Dream among Splendid Ruins, a temporary exhibition of Athens between the 17th and 19th centuries. Designed as a fictitious walk through the ruins of Athens during this period, visitors will experience a very different view and perspective of the ancient city, through the eyes of European travellers of the time. Photograph: Why Athens. ‘A dream through splendid ruins’ captures Athens between C17th-C19th Photograph: Why Athens. Italian artists, English architects were among the European travellers to Greece that recorded and illustrated the geography of Athens, publishing notable editions with precise detail. Italian artist Simone Pomardi published his topographic map of Athens in 1820

Around the mid – 17th century, more than 200 years into Turkish occupation, the Ottoman empire allowed greater travel and access into Greece that enabled artists and explorers of the time to capture and illustrate the beautiful vistas and antiquities in Athens. The published works that followed, caught the imagination and curiosity of the European public. Photograph: Why Athens. The town on the Acropolis with the Parthenon and the Erechtheion in the background. By Irish painter Edward Dodwell 1821, the Parthenon co-exists with humble Ottoman housing which were removed post Greek independence, creating the vista we are familiar with today

Through painted works, sculpture, music and engravings, A Dream among Splendid Ruins encapsulates the urban and cultural transition of Athens as it moved into independence.

The exhibition, which runs through to October 2016, commemorates the 150-year anniversary of the museum’s foundation. Several marble sculptures are on display for the first time and the curators have borrowed from the collections of the Library of the Greek Parliament and the City Museum of Athens.

This is a rare glimpse of old Athens and the exhibition successfully captures this vital period in Athens’ history and evolution.

The exhibition extends to a photographic display at the museum’s cafe and is presented in partnership with the Herakleidon Museum. Beginning in 1939, the photographs depict early city life in Athens, along with the advent of tourism in Athens. They will be on display until the 8th May.

A Dream among Splendid Ruins

Free admission to all visitors on the following days:
. 6 March (Memory of Melina Mercouri)
. 18 April (International Monument Day)
. 18 May (International Museum Day)
. 5 June (International Day of Environment)
. the last weekend of September (European Days of Cultural Heritage)
. the first Sunday of the month for the period between 1 November and 31 March

*Closed on: 25th March, Orthodox Easter Sunday and 1st May.