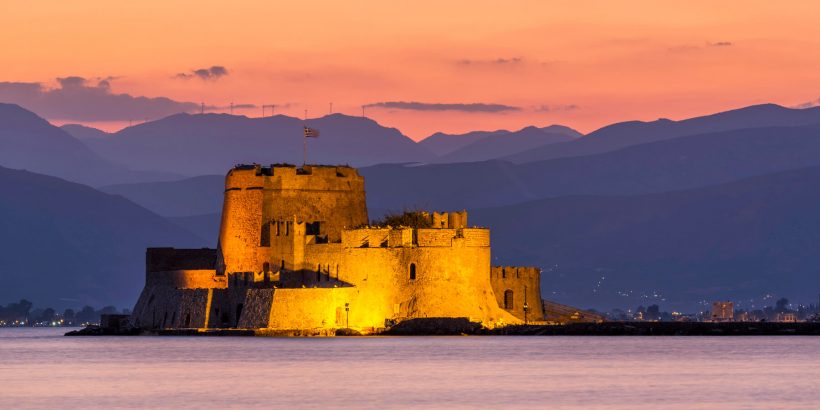 The Bourtzi Fortress, a Venetian castle off the coast of the Old Town of Nafplio. Photograph: DP/Pizzatravel

Napflio, also known as Anapli, is the main port in the Eastern Peloponnese and one of the most picturesque cities in Greece. According to mythology, it was built by Poseidon’s son, Nafplios, who named the city after himself. “Napoli di Romania” as the Venetians used to call it, maintains its history, local colour and traditions from times gone by. 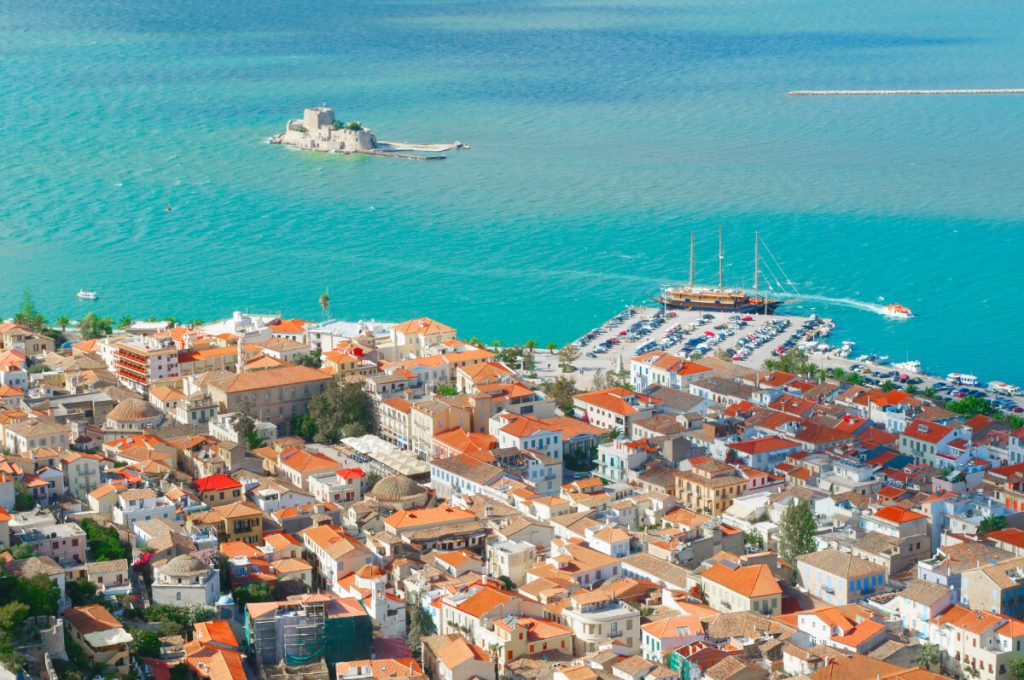 Looking out over Nafplio to the Bourtzi Fortress. Photograph: DP/Javarman

Assigned the first capital of Greece after Independence (between 1833 and 1834) Nafplio has been a major port since the Bronze Age and its strategic position led to the creation of three fortresses throughout its history, including its largest, Palamidi, the smaller Akronafplia and Bourtzi, found on an islet west of the old town.

Nafplio is an ideal base or launching pad to explore many nearby ancient sites including Mycenae and Epidaurus. Less than a two-hour drive from Athens, it’s also an ideal day trip and a popular escape for Athenians.

When the Venetians reclaimed Nafplio in 1685, it was made the capital of the Peloponnese peninsula, widely known as the Morea until the 19th century, which formed part of the Venetian empire. Wandering through the narrow streets, you’ll pass the Military Academy building, as well as the first Ministry of Defence, a stone-built, three-storey edifice presently housing the War Museum. 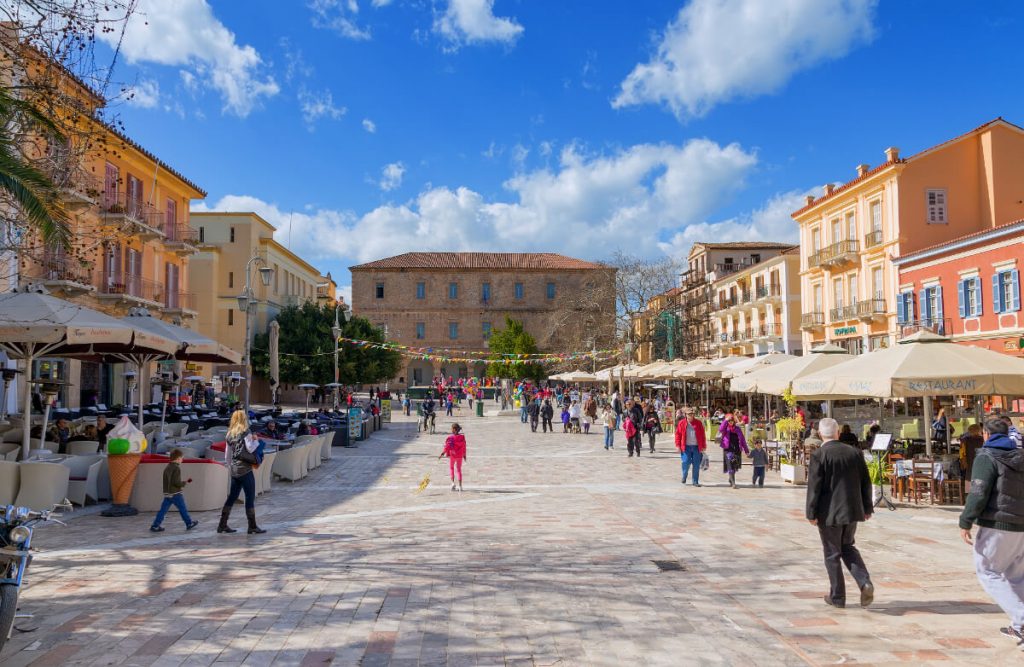 Syntagma Square is reminiscent of an Italian piazza and is the centre of Nafplion life. There are two Turkish mosques in the vicinity, one that housed the School of Mutual Learning (where teaching was carried out by the most competent students) and the other that was used by Greek Parliament.

The metropolitan church of St. George is decorated with murals and icons in the style of the Italian masters. The church of St Spyridonas was built in 1702, made infamous by the murder of Greece’s first governor Ioannis Kapodistrias in 1831. A commemorative plaque at the entrance of the church serves as a grave reminder, along with a glass-panelled locker with the bullet that killed him.

The Palamidis Municipal Library is housed in a 1887 neoclassical building, featuring works by modern Greek painters. The Archaeological Museum takes up a 1713 Venetian barracks, where visitors can admire prehistoric exhibits from the area. 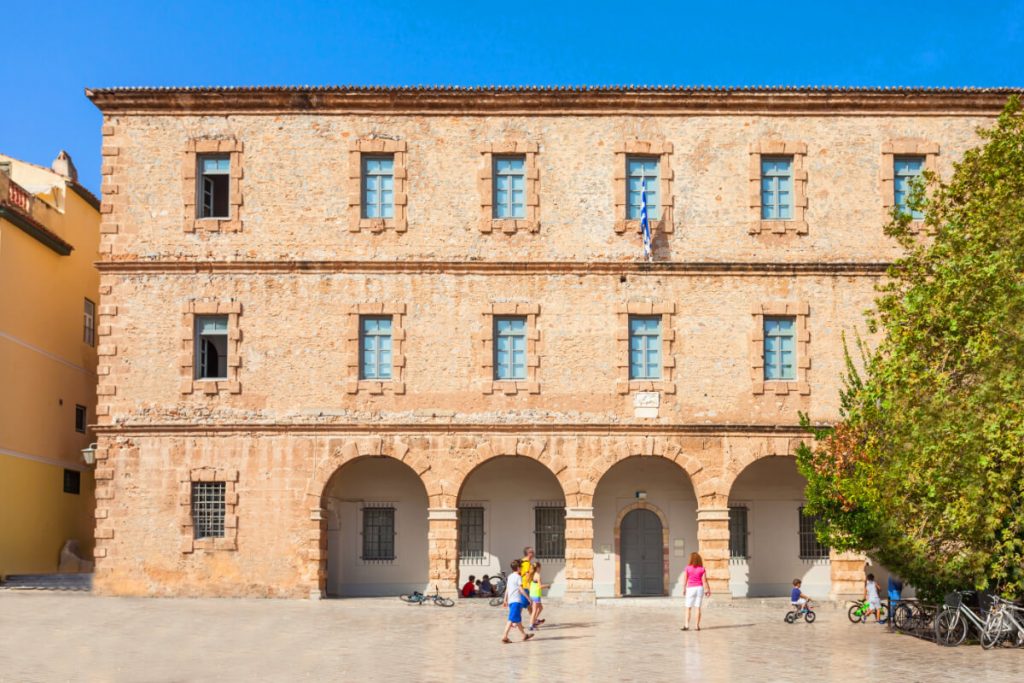 The Nafplio Folk Art Museum, considered one of the best in the country, was established in 1974 and houses more than 25,000 exhibits, including dress, textile, embroidery and traditional utensil collections, with a comprehensive library.

Ancient and modern historical monuments are everywhere but there’s no better way to get acquainted with the region than at Akronafplia, one of the city’s three planes, with its own fortress. 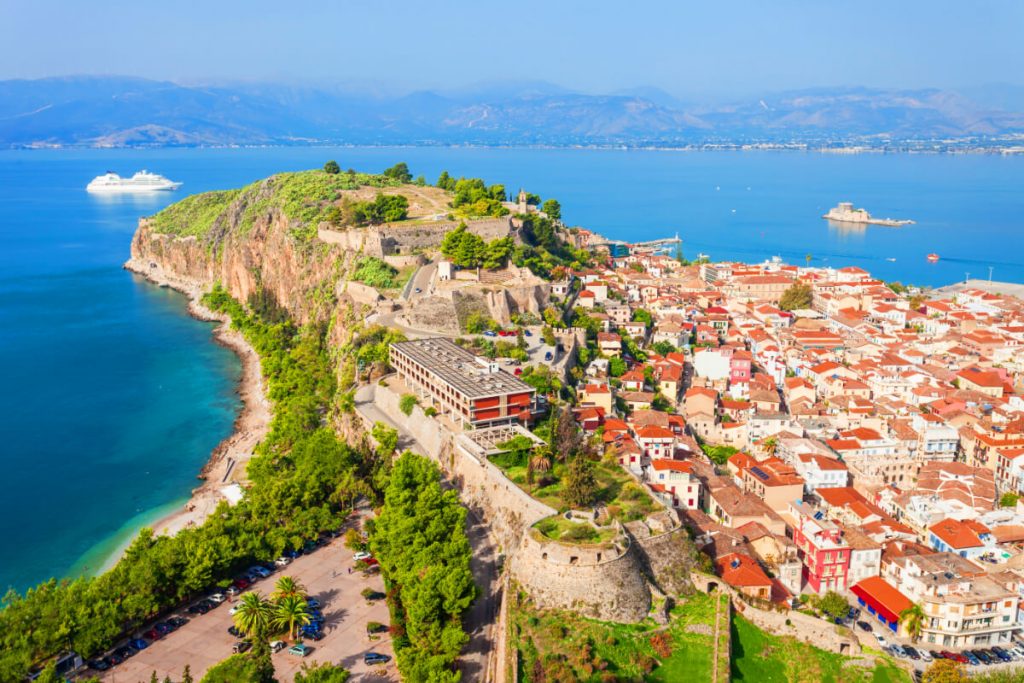 Looking out across Akronafplia. Photograph: DP/Saiko3p

According to Pausanias, Nafplio was already fortified in the 2nd century BC, built on the foot of the Palamidi, it was connected to the fortress with a secret passage. The east side of the Nafplio peninsula is dominated by the Castle of the Greeks (Castello dei Greci) a Byzantine ruin once built on a Mycenaean citadel. On the west side, you’ll find the Frankish Castle (Castello dei Franchi), featuring open emplacements, embattlements and embrasures, erected by the French de la Roche dukes.

A veritable maze of residential buildings stretches out at the foot of Akronafplia, most of them constructed at the beginning of the 20th century. It’s worth wandering around this picturesque network of winding streets, offering enough visual stimulation to keep you engaged for hours. 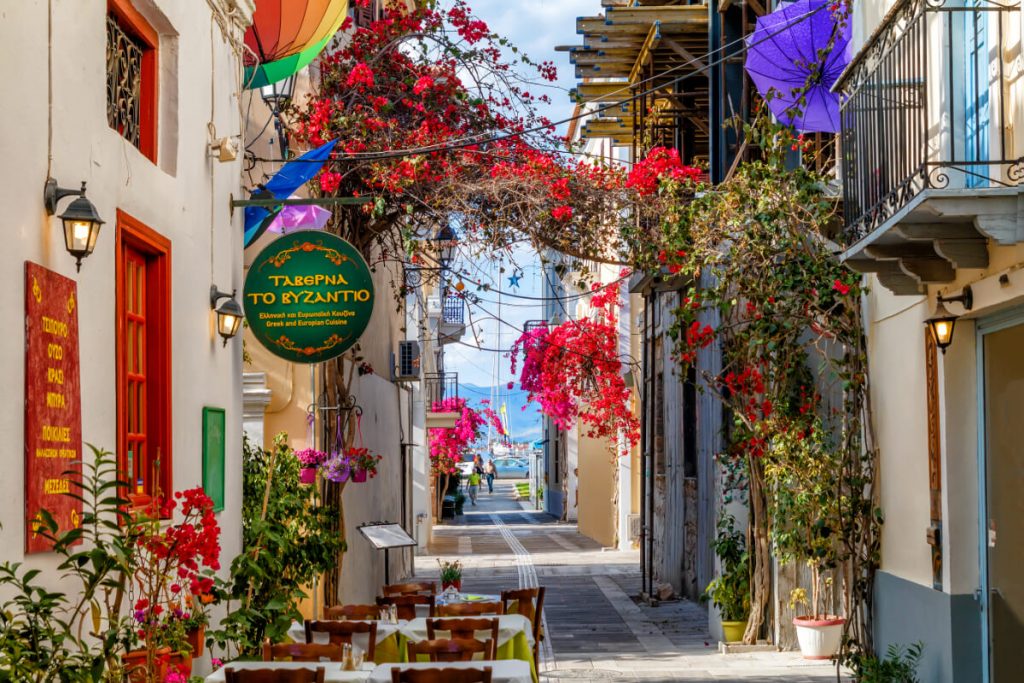 The colourful streets of the Old Town of Nafplio. Photograph: DP/Sollya.Bigmir

The construction of the Dolfin bastion began in 1702, in the shape of a half battlement. The fortification of the hill commenced in 1711. The concept was to build a fort consisting of mutually supportive bastions, developed incrementally on an east-west axis.

Palamidi was considered impregnable, so when it was seized by the Greeks, led by Staikos Staikopoulos on 29th November 1822 following a lengthy siege, the world was astounded. Four days later, the Turks signed a treaty handing the city over to Theodoros Kolokotronis, a pre-eminent leader of the Greek War of Independence. 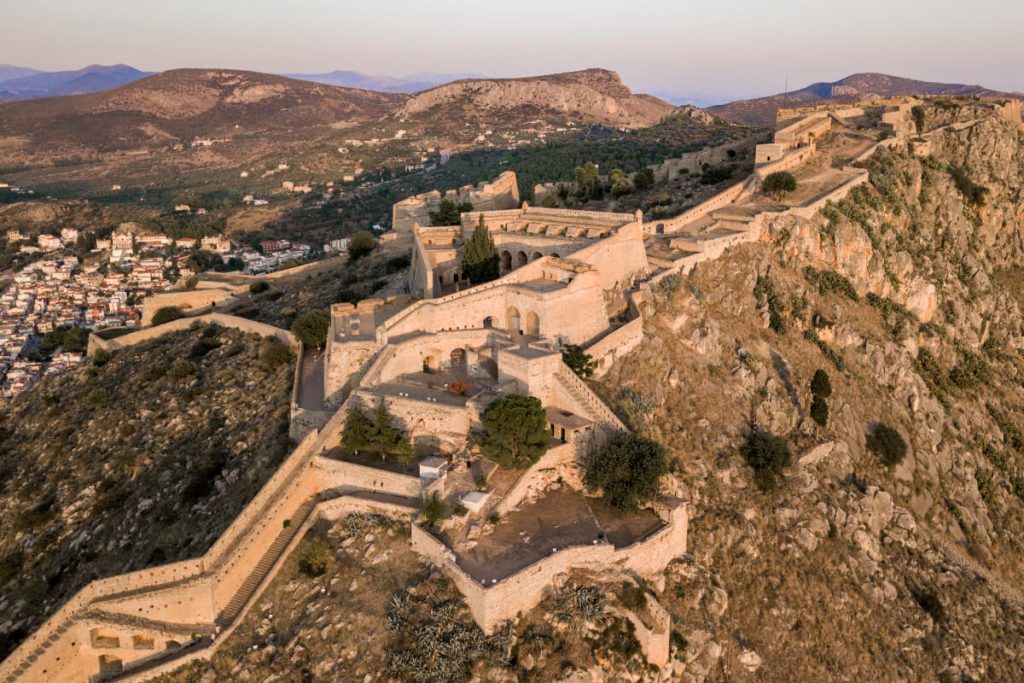 The Palamidi Fortress in Nafplio is said to have 999 steps. Photograph: DP/Pizzatravel

The historical chapel of St. Andrew on top of the fortress still stands, dating back to Venetian rule and the dismal cells once used as prisons are still there too. The castle has a lot of stories to tell, so don’t be discouraged by the 999 steps (although some claim there are actually 857). According to legend, the steps were originally 1000, but one was broken off by Kolokotronis, whilst riding his horse.

Why Athens Tip: You can catch a taxi to the top!

The water castle of Bourtzi beckons from afar. It was initially fortified by the Venetians in 1473 and took its present form during the second Venetian Rule in 1686. Located a mere 450m from the Nafplio pier, it used to be linked to Akronafplia with a chain to prevent access of enemy vessels. 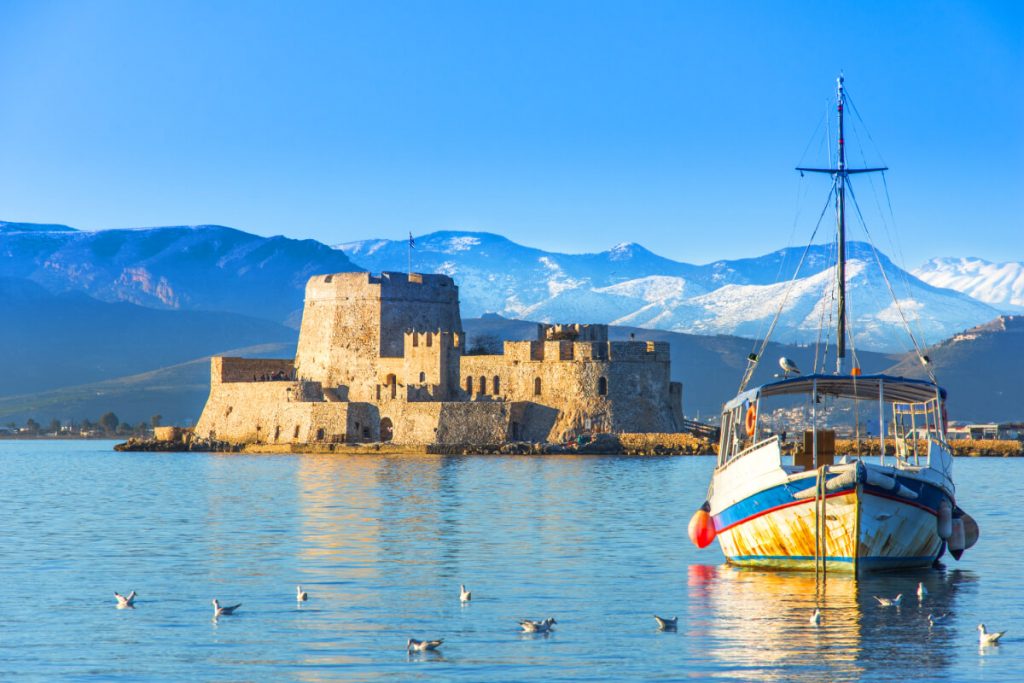 Why Athens Tip: You can reach the fortress by boat in summer, departing regularly from the port.

Nafplio is a special town in Greece not to be missed. It draws visitors in with its harmonious natural beauty and radiating mysticism. 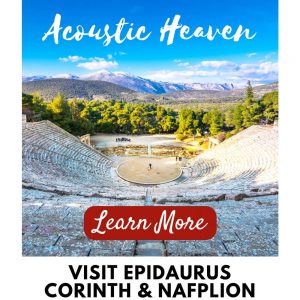 This article has been adapted and reproduced with the permission of its copyright owner, Vagma Media. Original Author: Angeles Zannis. Adapted by: Why Athens 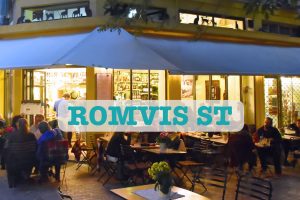 The centre of it all on Romvis Street

Athens by selfie – capturing the sites and landmarks of Athens 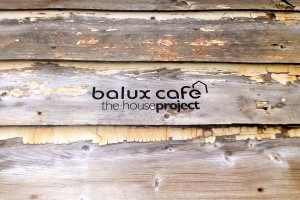