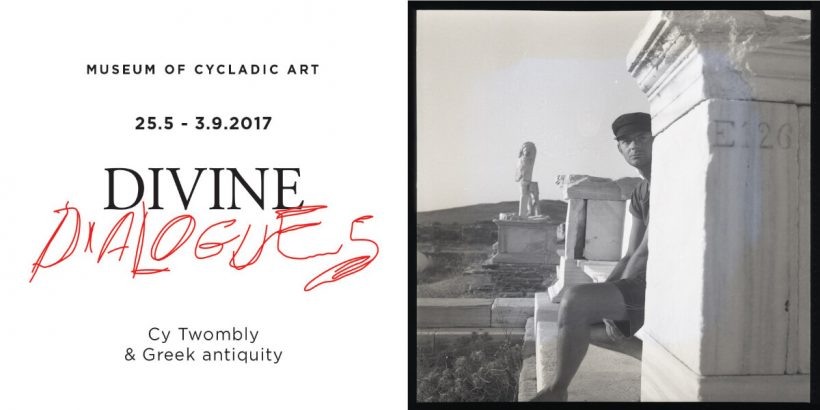 Cy Twombly on one of his inspirational visits to Greece. Photograph: Courtesy Archives Fondazione Nicola Del Roscio
Where: Museum of Cycladic Art
When: 25th May – 3rd September 2017
Why Go: A rare look at Twombly’s work side by side with that which inspired it

For the first time, 30 works by Cy Twombly inspired by Greek mythology and the artist’s close ties with Greece will be presented alongside 12 ancient artworks in an exhibition entitled Divine Dialogues at the Museum of Cycladic Art . Revealing a unique and original dialogue between ancient Greek and contemporary art, the exhibition includes representative drawings and sculptures by the contemporary artist, such as Venus (1975), Pan (1975), Nike (1981), Apollo (1975), Dionysus (1975), Orpheus (1979), Aristaeus mourning the loss of his bees (1973) and Aphrodite Anadyomene (1979). 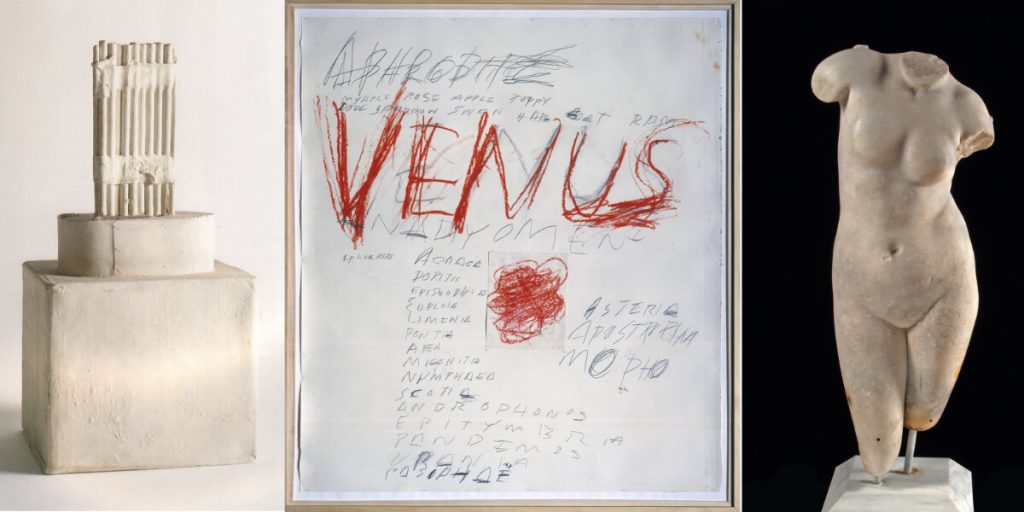 The famous François Vase, also known as the Kleitias and Ergotimos Krater, a milestone in the development of ancient Greek pottery and vase painting, which travels for the first time outside Italy, from the Archaeological Museum of Florence. It has been said that the François Vase is so unique that, even if all other ancient Greek vases were lost, it alone could illustrate Greek mythology and the code of Archaic Greek art.

Cy Twombly (1928-2011) was born in Lexington, Virginia. For many years Twombly’s work was better known in Europe than in US. Cy Twombly was finally discovered and recognised in his native country in the wake of a large-scale retrospective curated by Kirk Varnedoe in 1944-95 at the Museum of Modern Art in New York. Twombly‘s fascination with Greece is well known. Although he first visited the country during the summer of 1960, Greek mythology took an important place in his oeuvre from the late 1950s. But it was in the 1970s that he explored Greek history and mythology in depth, culminating with his masterpiece, ‘Fifty Days at Iliam’ (Philadelphia Museum of Art). He died at the age of 83 on 5 July 2011 in Rome.

The exhibition is curated by Professor Nikolaos Stampolidis, Director of the Museum of Cycladic Art and Jonas Storsve, Curator at the Centre Georges Pompidou in Paris and its major Cy Twombly retrospective exhibition. This presentation is made possible thanks to the kind support of the Cy Twombly foundation.

Why Athens Tip: The Gagosian Gallery Athens is pleased to present an exhibition of Cy Twombly’s photography, to coincide with ‘Divine Dialogues’. The gallery presentation comprises of more than twenty photographs taken in Rome and Gaeta between 1985 and 2008 from his days as a student at Black Mountain College during the early 1950s until his death in 2011 at the age of 83. Twombly captured his daily life in photographs. He recorded the verdant landscapes of Virginia and the coasts of Italy; close-up details of ancient buildings and sculptures; studio interiors; and still lifes of objects and flowers. May 25–July 29, 2017, 3 Merlin Street Athens.

Free guided tours of the exhibition, every Thursday at 6:30pm (with the price of normal admission).