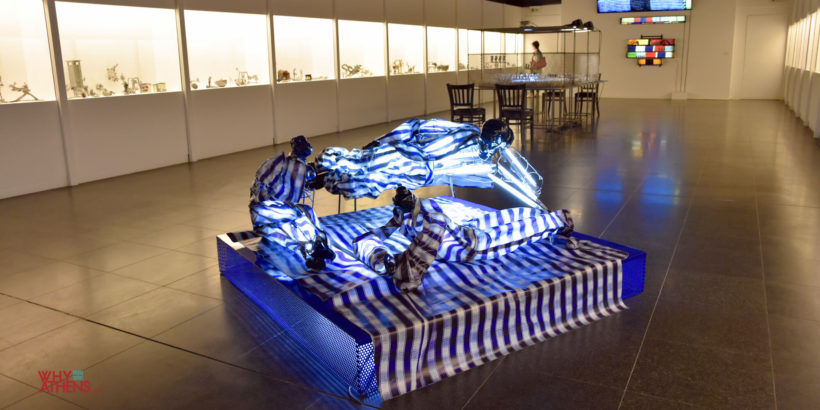 A sculpture from the Happy Birthday exhibition of George Lappas. Photograph: Why Athens
Where: Benaki Museum
When: On now - 20th November, 2016
Why Go: To see the last works of a great Greek sculptor

The DESTE Foundation, in collaboration with the Benaki Museum present an exhibition and tribute to the work of the late Greek artist George Lappas (1950-2016), one of the most important Greek sculptors of the 20th century.

Throughout his career, Lappas developed his unique visual oeuvre, dealing with fundamental human emotions of tragedy, catharsis, enigma and destiny. Titled “Happy Birthday” after a series of sculptures with the inscription, the exhibition showcases the artist’s most recent and unfinished work, in a linear display that Lappas himself placed “cinematographically” in his studio to suggest a film narrative, complete with plots, episodes, takes, cuts and edits.

The exhibit is not a retrospective, but focuses on the power and energy of Lappas’ research into the human condition as a way to enrich our perspective. His craft’s popular appeal was achieved through experimenting with the human form, and showing fundamental emotions, with strong absurd and ironic elements in the narrative. Born in Cairo, Lappas studied psychology and worked in various psychiatric hospitals in the US. He studied sculpture and architecture in India on scholarship and further studied architecture in London and art at the Athens School of Fine Arts before completing his studies at the Ecole des Beaux-Arts in Paris, on a French scholarship. He worked in the UK and France before becoming a professor at the Athens School of Fine Arts and took up residence at Paris’s Foundation Cartier of Contemporary Art. Lappas participated in biennales and exhibitions around the world including Paris, Sao Paulo, Venice, Glasgow and Berlin. His last solo exhibition Documents and Sculptural Landscapes (2014) for the Jewish Museum of Thessaloniki was part of the city’s 4th Biennale of Contemporary Art.

The Benaki Museum “Experience Ticket” can be purchased for 20 euros and entitles visitors to one entry per exhibition in all Benaki Museum locations, valid for 3 months.