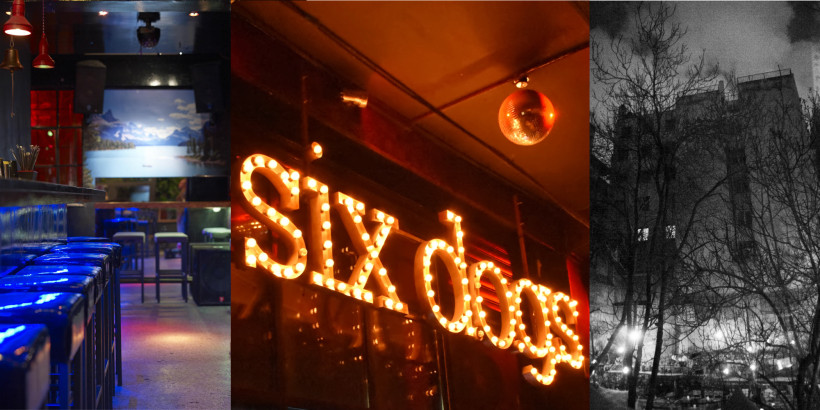 Where: Six d.o.g.s, Monastiraki
When: Various dates throughout June 2016
Why Go: An all in one cultural venue where art & music collide

Six d.o.g.s is an all day and night cultural space that hosts a wide range of events including exhibitions and music gigs. Also operating as a bar and nightclub, it features guest DJ’s and concerts that provide a platform for experimental music and emerging artists. The venue is one of a kind in Athens and includes an exhibition and project space along with a bar that serves cocktails and snacks until very late or (early in the morning!). The venue schedules more than 500 events per year. Greek painter Dimitris Ioannou presents his exhibition ‘Laying Dormant’. He explores objects as memory activating mediums and the idea that they can also create the feeling of suffocation. The artist also presents images and stories of people aged 7 to 77 who describe what they consider as irreplaceable objects in their lives.

Greek photographer Peter Nikoltsos returns to the Project Space, for the fourth time, presenting a set of paper images via slideshow. His main themes are broken marbles and marquetry, but he is also particularly focused on the designs and texture of paper.

‘Rocking Radio’ producers and editors invite us to celebrate their one year milestone on online radio. Rocking Radio has become one of the largest online rock radio channels, with listeners all around the world from America to the UK. The producers are ready to share their music selections live, to welcome in summer in the most “rocking” way.

Manifactura and its partners welcome summer with a 2-day bazaar on the ground floor of six d.o.g.s. 20 artists will display original handmade pieces, jewellery, accessories and small works of art at reasonable prices.

Six d.o.g.s presents three Greek bands known for their alternative sounds. Caldera who were established in Athens in 2013 are working on their first album. Nibiru is a post metal band, who have released a digital single of their latest work and Bacchus Priest is a psychedelic stoner band from Athens. Their first album Bacchus Priest was released last year.

Echo Train is a psychedelic rock band formed in Athens in 2013. They will perform on the six d.o.g.s stage, playing tracks from their first album Memento Mori. Their music has elements of psychedelic blues and garage influences from the 60’s. The concert will feature audio-visual material created by Greek artists Anna Tsapo and Marios Tsagkaris. The band consists of Ren (vocals), Greggy K. (guitars, beer jug), Dennis Panagiotidis (drums), Thanos Karagiannis (synths) and Spyros Valkaniotis (bass).