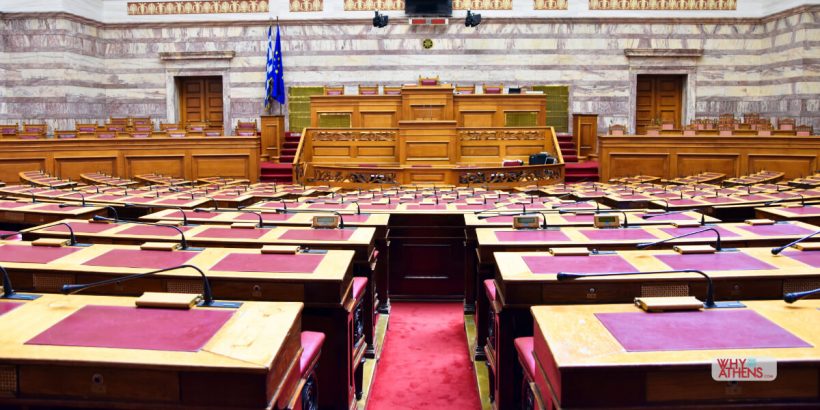 Inside the Plenary at Greek Parliament. Photo: Why Athens

Officially known as Hellenic Parliament or Vouli ton Ellinon, it’s a new privilege touring inside the Greek parliament building with an English speaking guide. The Greek parliament building, which overlooks Syntagma Square, is a reminder of where the modern Greek state began. Every major political and official event has occurred in front of this important landmark since it was built in 1843, including the famous public revolt which occurred in September that year, against King Otto’s absolute monarchy that finally saw the introduction of Athens’ first constitution, hence the name Syntagma Square meaning Constitution Square. Today, the citizens of Athens still head to Syntagma Square to exercise their democratic rights of free speech. Here’s a look behind these great walls that are full of the history and legacy of modern Athens.

A royal palace before Greek parliament Greek Parliament with the Grand Changing of the Guard that occurs every Sunday morning. Photograph : Why Athens

In 1833, a year after Greece was recognised as an independent nation via the signing of the Treaty of Constantinople, the European powers of the time (Britain, France and Russia) decided that Greece should have a monarchy. Otto, the adolescent son of King Ludwig of Bavaria, became the sovereign and Greece was declared an absolute monarchy. Within 12 months, Athens was declared the capital of the Greek Kingdom and Otto left Nafplio, the country’s first provisional capital of Athens, with a grand vision of a new city. Otto’s enlightenment began with plans to build a new palace for himself as the new king. Friedrich von Gaertner who was the official architect of the Bavarian court, chose the location based on its high elevation to enhance the presence of the palace. The foundation stone was laid on the 6th February 1836 but it wasn’t until 25th July 1843, that King Otto and his new wife Queen Amalia, took up residence in the newly completed palace. The Eleftherios Venizelos Hall survived the great fire of 1909. Photograph: Why Athens

The grandeur of the original royal palace of 1843 begins with the staircase that leads up to what was originally the palace trophy room and the aide-de-camp’s quarters. Today it is named after Eleftherios Venizelos, the Greek Prime Minister who is heralded as the maker of modern Greece. This grand hall is located on the western side of the building (facing Syntagma Square), featuring the original gold candelabras which are shaped as magnificent crowns. On Christmas Eve 1909, a major fire destroyed all but a few rooms including this one.

The frieze of the Greek Revolution Athena pictured in the frieze of the Greek War of Independence inside the Venizelos Hall of Hellenic Parliament. Photograph: Why Athens

The events of the Greek Revolution are depicted in the Venizelos Hall with a 78 metre long frieze drawn in the 1840’s by German sculptor Ludwig Michael von Schwanthaler and painted by Phillip and Georgios Margarites. It’s a heroic portrayal of Greece’s liberation depicting what the Germans and Greeks at the time, wanted to portray of the revolution from 1821 to 1832. Part of the frieze was damaged by the fire of 1909 but was thoughtfully reconstructed without colour in order to distinguish it from the original work. Items from the Junta exhibit in the Venizelos Hall. Photograph: Why Athens

The Venizelos Hall features exhibits of Greece’s political history with original documents, manuscripts, photos and propaganda that depict the turbulent times since Greek independence.The seven year junta (1967-1974) and the events surrounding its end, ultimately led to the formation of a new constitution and democratic government in Greece. It’s a reminder that Greece has only been under a continuous democracy for a little over 40 years. The plenary with the King and President’s balcony. Photograph: Why Athens

On the 1st July 1935, the government of Eleftherios Venizelos had its first plenary session in what was originally the royal ballroom of the old palace. Still operating as a constitutional monarchy at this time, the balcony and doorway that overlook the parliament floor were originally used by the King to make speeches and observe the government debate. Since the abolition of the monarchy in Greece, the balcony is strictly reserved for use by the President of the Republic of Greece. However, the doors have remained closed and no president has ever sat there or entered the balcony again as a sign of solidarity to democracy.

Seats in the debating chamber

The seats in the debating chamber of Greek Parliament. Photograph: Why Athens

The debating chamber in Greek Parliament has 300 seats in an auditorium style arrangement. As is typical in democratic assemblies, parties are apportioned either to the left, right or middle, according to their political alliance. A majority of 151 seats is required in order to form government. The furniture in the debating chamber where the members of parliament sit are the originals from the old parliament building that was founded in the 1920’s and located on Stadiou Street. The desk tops still show signs of what were once ink wells. The addition of microphones are modern additions as are electronic panels for voting. Voting in the debating chamber is now recorded electronically. Photograph: Why Athens

Voting in the Greek Parliament is an open process unless there is a certain need for a secret ballot. Since July 2014, the manual roll-call system that the Greek Parliament utilised was replaced by an electronic process. Members of parliament are issued with their own unique electronic ID cards which are inserted into the device to register votes automatically. As part of the constitution, 75 members of parliament must be present with a minimum of those being half of the elected government in order for parliament to sit. Dignitaries and guests of parliament are seated to the left of the speaker. Photograph: Why Athens

A special section to the left of the speaker is reserved for guests and dignitaries who are invited to observe a parliamentary session. The section differentiates itself from the rest of the room by its pink velvet seating and the fact that there are no microphones, as guests do not participate in parliamentary debate. Non-members of parliament can only address the room by invitation and from the speakers podium. World leaders such as Charles de Gaulle and George Bush Senior are two examples who have addressed the parliament in its short history.

The public gallery and glass roof The glass roof and public gallery. Photograph: Why Athens

The debating chamber features a two level public gallery and impressive glass roof decorated with the symbolic Greek key motif. During sitting times, the gallery is open to the public and media. Admission is granted depending on seating availability and presentation of a government identification card.

Want to see more? The parliament is open for public tours conducted in English during summer months.