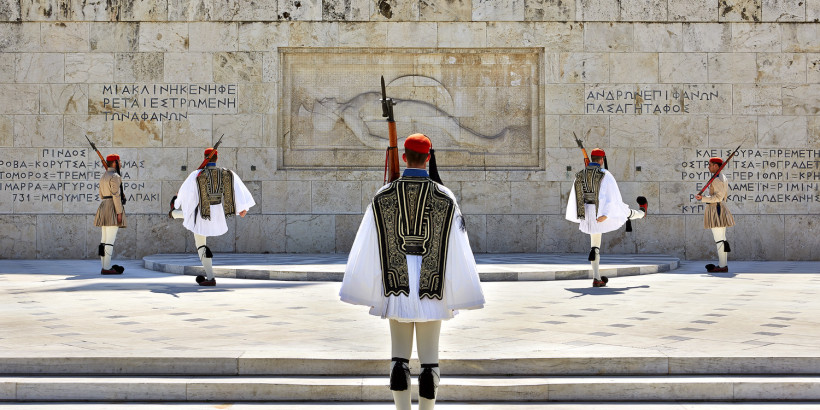 Greek guards or “Evzones” are members of the Presidential Guard found outside the Hellenic Parliament. They have become synonymous with the city of Athens and were originally founded in 1868 as a regiment of the Greek army. It is a high honour for a soldier to be selected to join the Evzones.

They guard the grave of the Unknown Soldier that represents the common memory of all unknown soldiers killed at war. The changing of the Greek guards occurs every day at the top of the hour.

The Changing of the Guard. Photograph: Why Athens

From Monday to Saturday the Evzones will be dressed in their khaki summer service uniform or in their black winter uniform.

The traditional dress of Greek guards include the while kilt or “Foustanella” which has 400 pleats representing the number of years Greece was under Turkish occupation. They are handmade by special craftsman taking around 80 days to make. A Presidential Guard wearing a Foustanella. Photograph: Why Athens

Why Athens Tip: Every Sunday at 11:00am guards will be in dressed in their traditional white kilts making it a much more ceremonious affair with great photo opportunities. An Evzoni Officer can be distinguished by his striking red uniform. Photograph: Why Athens The Grand Changing of the Guard parade on every Sunday morning at 11am. Photograph: Why Athens

Changing of the Greek Guards

Mon-Sun top of every hour for change-outs

Sundays at 11:00am the Grand Changing of the Guard Ceremony
Photography: Permitted
Closest train station: Syntagma

Getting there: Opposite Syntagma Square 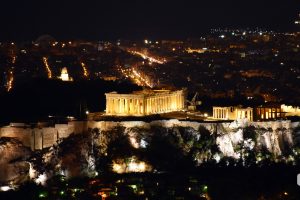 Best places to photograph the Acropolis 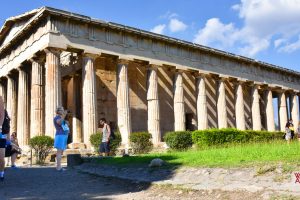