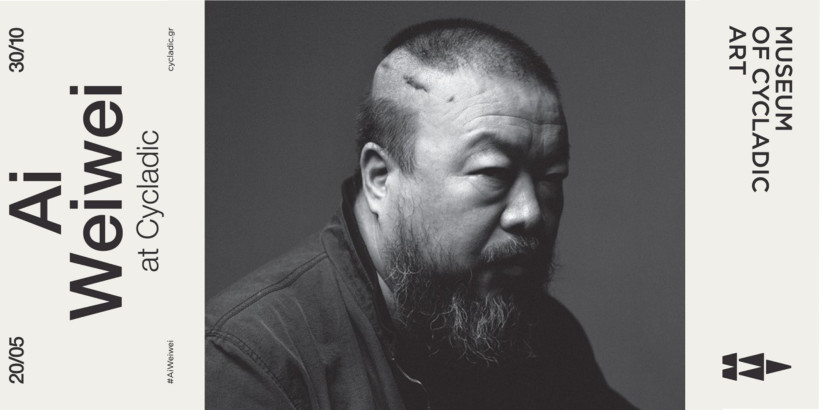 Chinese artist and provocateur, Ai Weiwei will present his visionary work at the Museum of Cycladic Art that is set to be the cultural event of the year in Athens.

As Weiwei’s first exhibition at an archaeological museum, new and unseen work will be inspired by the museum’s significant collection of ancient Cycladic art. Weiwei’s previous works will also feature including; Grapes (2011), Divina Proportione (2012), Mask (2011) and Cao (2014). ‘Grapes’ by Weiwei. A cluster of Qing stools

Weiwei is known for his critical examination of current political and social issues. In 2015 the artist visited the island of Lesbos at the peak of the refugee crisis, where he has since set up a studio. His work will draw further attention to this humanitarian issue, creating a true cross-cultural depiction of past, present and a universal hope for the future. Ten per cent of the proceeds from the exhibition will directly benefit the people Weiwei has encountered during his time in Lesbos.

Born in Beijing in 1957, Ai Weiwei is one of the most significant and outspoken artists to emerge from China in recent decades. As an artist, architect, writer, filmmaker and political activist, he has been highly and openly critical of the Chinese government’s stance on democracy and human rights. He has investigated government corruption and cover-ups, as well as the quality of human life in modern-day China. In 2011, following his arrest at Beijing Capital International Airport on 3 April, he was held for 81 days without any official charges being filed; officials alluded to their allegations of “economic crimes”. Upon his release, he was prohibited from traveling abroad, engaging in public speech, and was subjected to continued government surveillance. His passport was eventually returned to him in 2015.

Ai Weiwei is best known for his sculptures and large-scale installations, which conceptually marry traditional Chinese craft and modes of thought with contemporary political messages. In his sculptural works he often uses reclaimed materials such as ancient pottery, wood from destroyed temples, marble and jade, uniting past and present; the old China and the new. As well as engaging in many long-term research projects such as his ‘Citizens’ Investigation’ into the Sichuan Earthquake victims in 2008, Weiwei also served as artistic consultant on the design of the National “Bird’s Nest” Stadium for Beijing’s 2008 Olympics and has had major exhibitions and pavilions all around the world.


Free guided tours of the exhibition and Ai Weiwei’s artistic methods will take place from 1st September – 30th October on the following days and times: