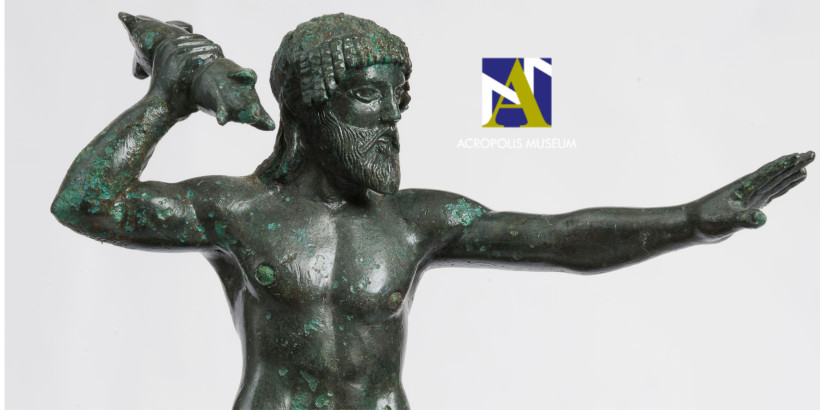 Figurine of Zeus Keravnios. The god of sky and natural phenomena is holding his characteristic symbol of thunder. 470-460 BC © Acropolis Museum
Where: The Acropolis Museum
When: On now - 10th January 2017
Why Go: To get up close to the ancient oracle of Dodona

The Oracle of Dodona provides a glimpse into the oldest Greek oracle and its role and importance in the ancient world, highlighting the human need to predict the future.The exhibit’s narration begins with Dodona during the late Bronze Age. Clay and bronze artefacts illuminate the identity of the first inhabitants, the primitive cult of Mother Earth (Earth Goddess) and the establishment of Zeus’ cult and his predominant presence in the sanctuary. The central theme is the prophetic oak tree, that with the rustle of its leaves, would answer the agonising questions of people who wanted to know what their future would be. Prophecies were also given by priests who de-coded the sounds of bronze cauldrons and the cooing of pigeons. Sheet of lead with a question posed by a visitor named Hermon, inscribed: who is the god he should pray to in order to acquire useful descendants from his wife Kretaian. 525 – 500 BC © Acropolis Museum

The excavations conducted in Dodona have brought to light some thousands of questions carved in metal sheets of lead, posed by visitors in the sanctuary. Some of these questions concerned matters of trade, debts, assets, court decisions, health, fertility, upcoming marriage, dowries and widowhood.

During the exhibition, the museum’s restaurant will offer tastes from the region of Ioannina in northwestern Greece.

The exhibition is conducted in collaboration with the Ephorate of Antiquities of Ioannina. The exhibits are on a loan from the Ioannina Museum and the National Archaeological Museum, Carapanos Collection.

DODONA: THE ORACLE OF SOUNDS


Visitors will have the opportunity to learn about Dodona and the ancient oracle in greater detail with FREE guided tours conducted by archaeologists in English and in French.

English: Tuesdays, Fridays and Sundays at 11:00am

French: Every last Sunday of the month at 11:00am

Arrange at the museum’s information desk, no bookings required.