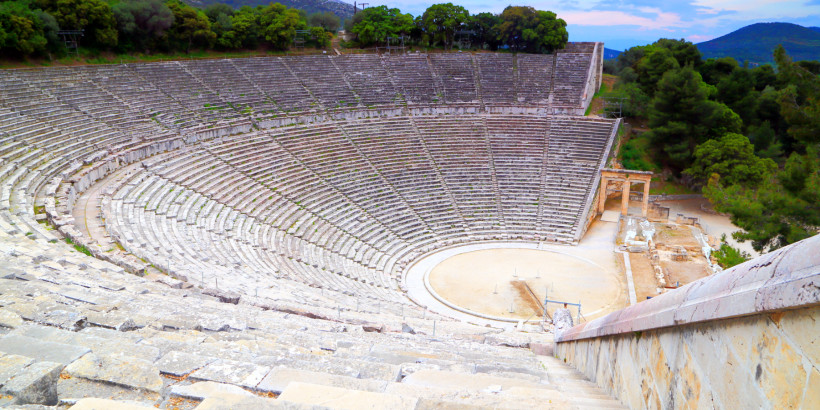 The ancient theatre of Epidaurus. Photograph: Inu/shutterstock
Where: Palea Epidaurus in Argolis
When: July/August Programme 2016
Why Go: To experience the perfect acoustics of this ancient theatre

The ancient theatre of Epidaurus is regarded as the best preserved ancient theatre in Greece and famous for its perfect acoustics. It was constructed in the late 4th century BC with a capacity of more than 12,000 spectators.

Epidaurus theatre is located at Palea Epidaurus in Argolis. Getting there: A two hour drive from Athens, KTEL bus service provides transport to and from the venue.

Why Athens Tip: The Greek National theatre are selling ticket and transport packages to their three productions playing at Epidaurus theatre: Antigone, Oedipus Rex and Lysistrata, until 31st July. The theatre works listed are performed in Greek with English subtitles

An ancient Greek comedy directed by George Kimoulis. The God of Wealth Plutus, examines contemporary Athens (of 408 BC).

The only surviving works of an ancient Greek theatre trilogy, Oresteia is a Greek tragedy and considered Aeschylus’ finest work. Exploring themes of revenge and justice, a tight group of 12 elite actors will share the various parts. Directed by Yiannis Houvardas.

Sophocles’ ancient Greek tragedy Antigone premiered at the Epidaurus theatre around 441 BC. Director Stathis Livathinos adopts the modern translation by Dimitri Maronite. The performance is a new collaboration between the National Theatre of Northern Greece and the Cyprus Theatre Organisation.

The National Theatre of Northern Greece presents this political tragedy that adopts the modern translation by Greek poet George Blanas. This performance is directed by renowned Lithuanian director, Cezaris Graužinis.

The National Theatre in collaboration with the Russian Vakhtangov Theatre present Oedipus Rex, an ancient Athenian tragedy that many regard as Sophocles’ masterpiece. Directed by the award winning Lithuanian director Rimas Tuminas. The show will go on to tour in Moscow in September.

This ancient Greek comedy was originally performed in classical Athens in 411BC. The story revolves around Lysistrata’s resolve to end the Peloponnesian War. She convinces the women of Greece to withhold sex from their husbands or lovers in an effort for the men who controlled society, to negotiate a quicker outcome towards peace. Presented by The National Theatre. Directed by Michael Marmarinos. Lena Kitsopolou in the lead role of Lysistrata.

The Onassis Cultural Centre appears for the first time at Epidaurus presenting their interpretation of the ancient Greek comedy, The Birds. Directed by Nikos Karathanos.