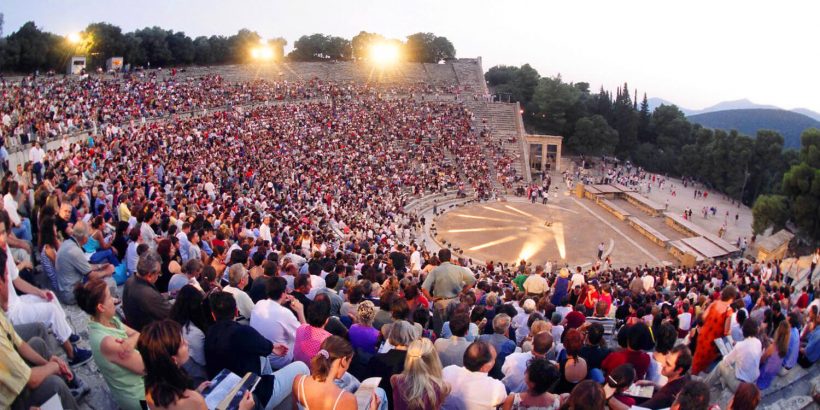 The Ancient Theatre of Epidaurus. Photograph: Evi Fylaktou | Athens and Epidaurus Festival
Where: Palea Epidaurus in Argolis
When: 17 July to 9 August 2020
Why Go: To experience a live performance & perfect acoustics at this ancient theatre

As part of the annual Athens and Epidaurus Festival, the Epidaurus theatres come alive with the works of great Greek playwrights such as Aeschylus, Euripides, Sophocles and more. These ancient sites welcome more than 90,000 theatre-goers each year and are generally spread across eight weekends in summer. Experiencing a midsummer production at Epidaurus is an absolute highlight for both locals and holiday-makers alike.

The famous ancient theatre of Epidaurus was constructed in the late 4th century BC, around the time when Athens was flourishing in art, philosophy, science, and of course theatre, and can seat more than 12,000 spectators. It is regarded as the best-preserved theatre in Greece and famous for its exemplary acoustics.

A twilight performance by the National Theatre of Greece during the Epidaurus Festival. Photograph: Thomas Daskalakis/NTG

Last year’s Epidaurus theatre programme began in mid-June and continued through until mid-August. The theatre performances took place every Friday and Saturday evening at 9pm for ten consecutive weeks.

For 2020, the theatre schedule has been scaled back to nine performances across three weekends in late July and early August. The performances will take place on Friday, Saturday and Sunday evenings at 9pm.

The theatre works listed are performed in Greek with English subtitles 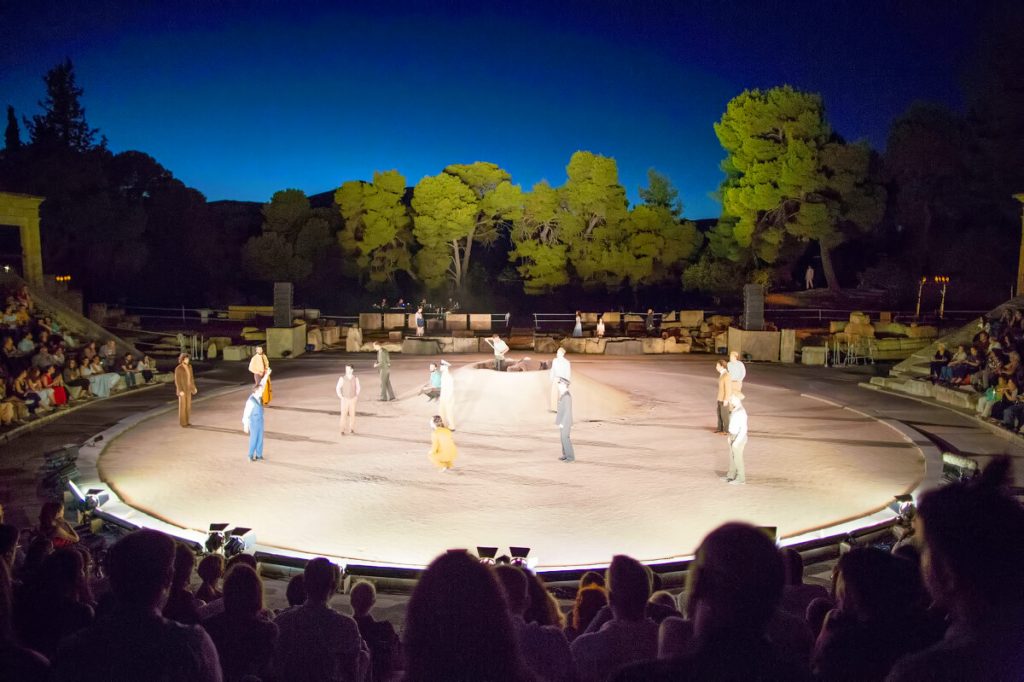 Internationally acclaimed violinist Leonidas Kavakos will perform a solo repertoire by Johann Sebastian Bach at the Ancient Theatre of Epidaurus as part of a special event to mark the 65 years of the Athens and Epidaurus Festival.

THE PERSIANS by Aeschylus (THEATRE) – National Theatre of Greece

The Persians (472 BC) is both the oldest extant ancient drama and a historical document about the most significant armed conflict during the second Persian invasion of Greece: the Battle of Salamis. Aeschylus’ tragedy focuses on one of the most pivotal battles in human history, in which the dramatist personally fought.

Popular actor Odysseas Papaspiliopoulos makes his first directorial venture at the Ancient Theatre of Epidaurus, staging a comedy by Aristophanes. Lysistrata was written in 411 BC, at a time when the Athenian city-state was at a critical point, in the midst of the Peloponnesian War. Following the disastrous Sicilian Expedition, Alcibiades has defected to Sparta. From their post in Decelea, the Spartans launch a fierce attack against the Athenians. Within the walled city, the situation is equally grim: the politically volatile situation has weakened the Assembly and the oligarchs are starting to make their presence known.

THE BIRDS by Aristophanes (THEATRE) – National Theatre of Northern Greece

Fed up with the political, social and financial corruption of the city, Pesthetaerus and Euelpides seek Tereus, formerly a human and currently transformed into a hoopoe, in order to learn from him and from the other high-flying and perhaps knowledgeable birds whether there is a peaceful place where they could settle. Together they intend to found a new republic, somewhere between heaven and earth, that will hold dominion over both humans and gods, and where birds will have their rightful place. 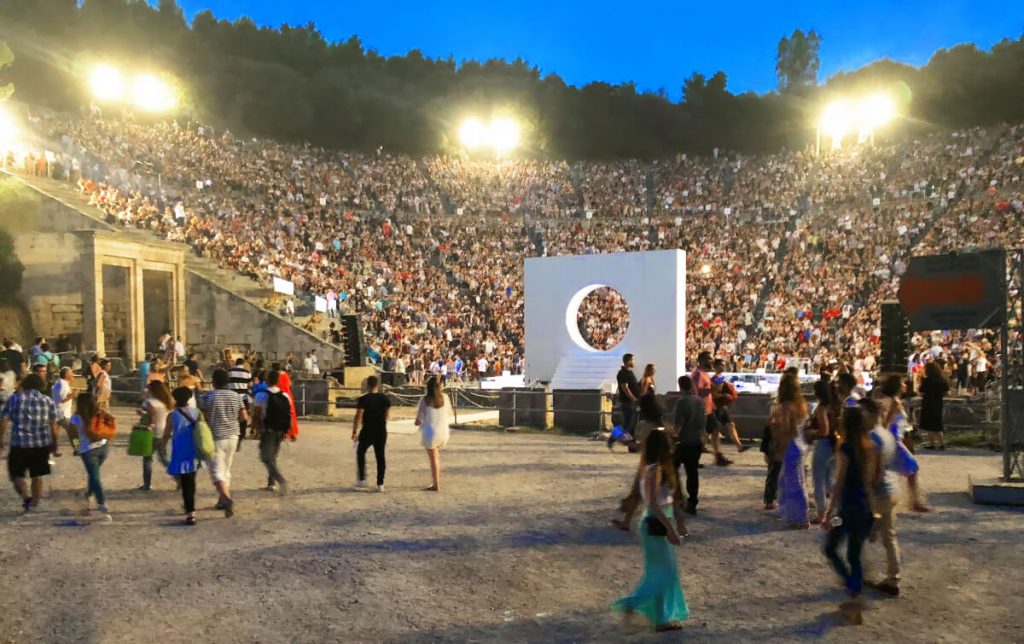 Jumping off cliffs and crossing steep paths while fleeing her pursuers, Frankojannou, the tragic heroine of Alexandros Papadiamantis’ novella The Murderess, has been etched in the memory of readers for the past 120 years. The character is now restored to her natural habitat, a country landscape, coming alive through Alkinoos Ioannidis’ music. The musician’s voice, an instrument in itself, is accompanied by several musical instruments, which Ioannidis performs, records and plays back in real-time, using the technique of live looping.

Contrabassist Mihalis Kalkanis stands out among the new generation of Greek jazz musicians. Kalkanis fuses electronic music with traditional songs of his grandmother’s generation, doing field recordings in religious ceremonies of immigrants, and delivering a fusion of sounds in his album World Echoes in Athens.

In this concert at the Little Theatre of Ancient Epidaurus, Kalkanis collaborates with Syria-born, Armenian oud virtuoso Haig Yazdjian and avant-garde master of electric guitar Jannis Anastasakis, Kalkanis, creating a soundscape where jazz, ambient, traditional, world music, psychedelia, noise, melodies and electronic are woven together to give birth to something altogether unique. 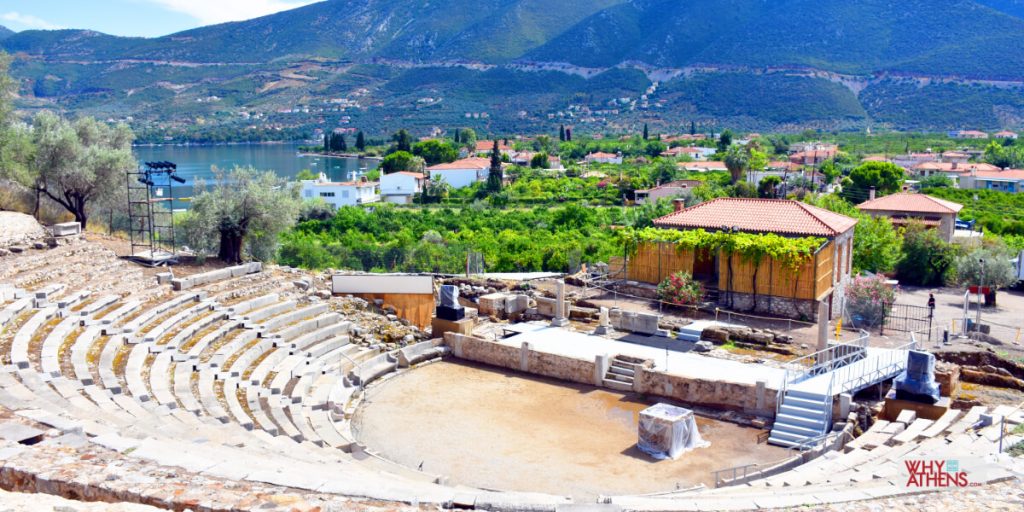 The Little Theatre of Epidaurus. Photograph: Why Athens

Rafi, one of the most dynamic Greek music theatre companies, returns to the Athens & Epidaurus Festival with Michelangelo Falvetti’s elegant Baroque oratorio Il diluvio universale (The Great Flood). Presented in Greece for the very first time, the oratorio of this provocative Sicilian priest caused a sensation when it was originally performed. Inspired by the Biblical story of the Great Flood, its protagonists are natural elements such as water, fire and air rather than Biblical figures. Audiences will be carried away by a seductive blend of period instruments, oriental maqam and animal sounds, with virtuosos Michalis Siganidis and Harris Lambrakis improvising and sweeping us off our feet as if they were medieval troubadours.

One of the most heartrending works ever composed about the end of romantic love and the despair of being left, Francis Poulenc’s one-act opera, based on Cocteau’s La voix humaine (The Human Voice), will be presented for the first time at the Little Theatre of Ancient Epidaurus, in a bold directorial concept by Maria Panourgia. Five dancers/actors, each shut up inside his or her own telephone box, round up a cast led by soprano Myrsini Margariti, as fellow travellers throughout the heroine’s anguish and dreams. The set design will reflect the heroine’s emotional rollercoaster to the sounds of Maria Papapetropoulou’s piano.

Inspired by Ariel’s song in Shakespeare’s The Tempest to create Watersong, a musical performance featuring songs about water and desert, life and death, fertility, magic, desire, and purification. The artists are joined by Tunisian singer Lamia Bedioui, whose distinctive voice will transport the Little Theatre of Ancient Epidaurus to the realm of the desert. The Arabic language and the Bedouin dialect will cross paths with Mediterranean languages. Traditional and Renaissance songs from several countries are mixed together, spinning tales about water and its power, about the life that water can both give and take away.