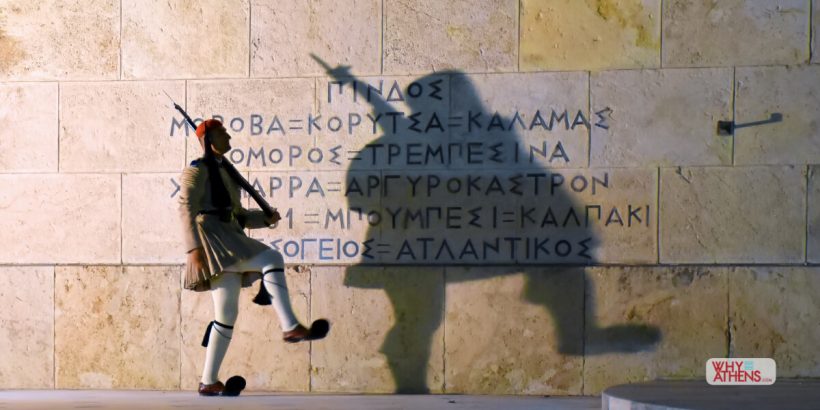 An Evzone stands guard at the Tomb of the Unknown Soldier in Athens. Photograph: Why Athens
Where: Syntagma Square & Panepistimiou
When: 25 March 2022
Why Go: To see the cultural and military parades

Each year on the 25th March, Athens comes to a standstill for Greek Independence Day, which commemorates the start of the Greek War of Independence in 1821. It is also the religious holiday of The Annunciation that is observed on this day by Eastern Orthodoxy. 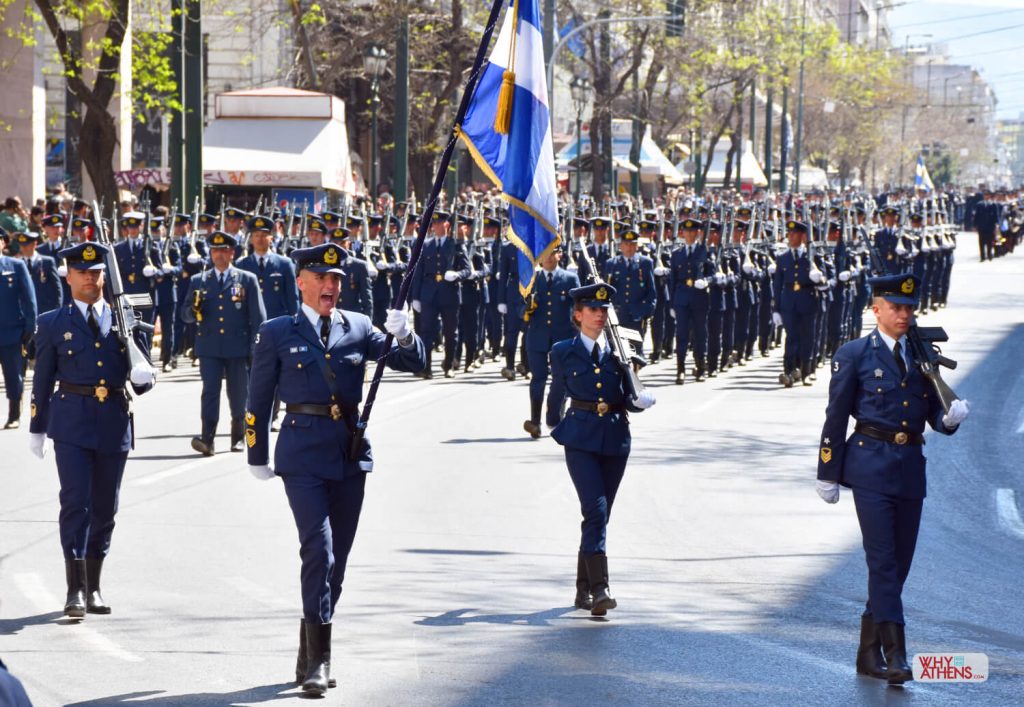 One of the dozens of armed forces brigades marching on Greek Independence Day through Athens. Photograph: Why Athens

This grand military parade commences from 11:00am sharp and makes its way from Vasilissis Amalias Avenue, past Hellenic Parliament, with official dignitaries in attendance including the President of Greece. The parade then makes it way down Panepistimiou Street where the crowds line each side of the street in front of the Attica department store and other iconic neo-classical buildings including the Academy of Athens, the National Bank of Greece and the National Library, all the way to Omonia Square. 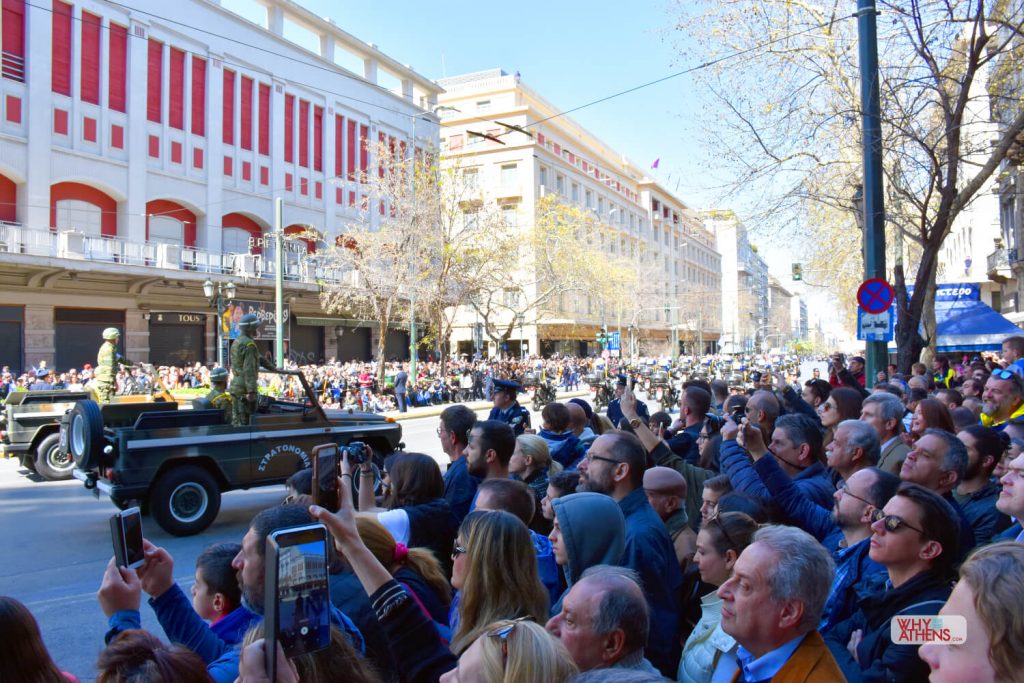 The crowds lining each side of Panepistimiou Street in central Athens for the parade. Photograph: Why Athens

Traditionally, the parade features thousands of armed service personnel, with squadrons from all of the Hellenic Armed Forces, civil and military marching bands followed by a procession of military vehicles. 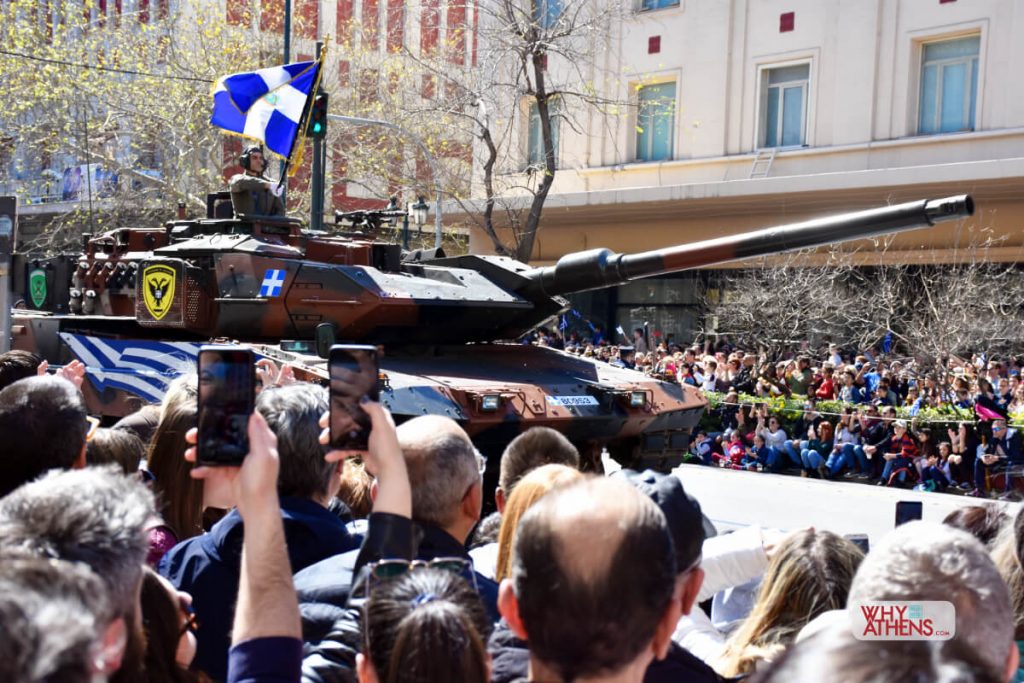 The military might of Greece is on full display on Independence Day in Athens. Photograph: Why Athens

We recommend getting into Syntagma Square by no later than 10:00am in order to secure a reasonable vantage spot. We also suggest anywhere along Panepistimiou Street as an optimal viewing point. Greek Independence Day is the most well-attended parade on the calendar in Greece, with over 100,000 people attending every year. The procession runs for around 90 minutes, and crowds from Syntagma Square will follow the last marching band up Panepistimiou Street toward Omonia Square where the parade ends. Previous years parades have started at 11:00am. 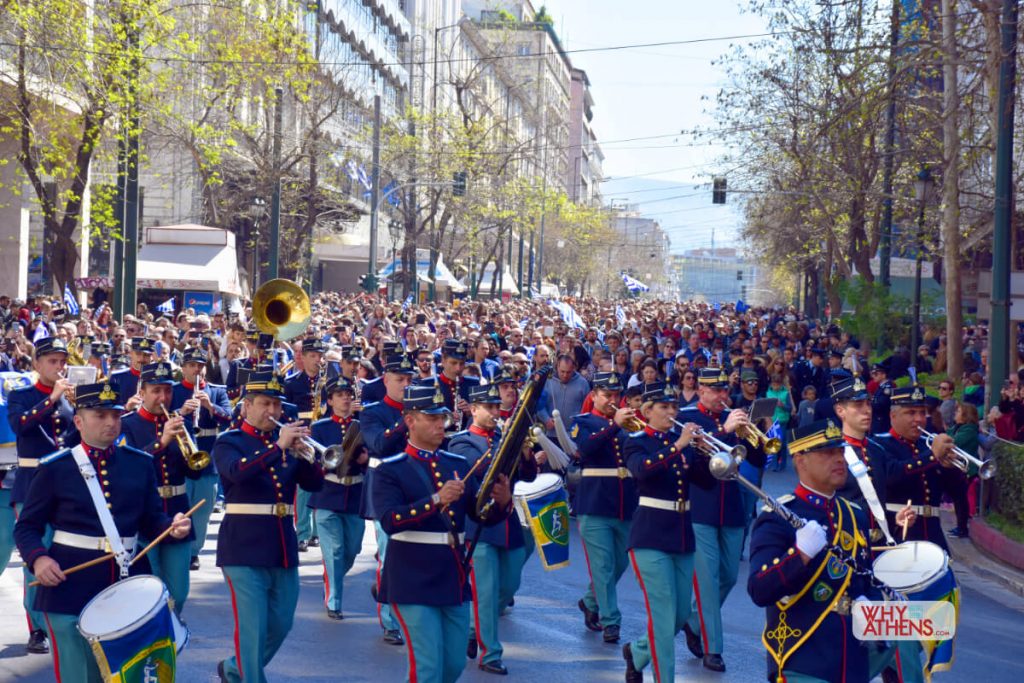 The last marching band is followed by a procession of tens of thousands of people from the crowd as the parade draws to an end. Photograph: Why Athens

Annunciation Day will be commemorated in other parts of the city before and after the parade. The religious significance relates to the archangel Gabriel who is said to have appeared before the Virgin Mary to tell her that she would bear the son of God. Churches such as the Metropolitan Cathedral in Athens will hold major services on the day and all are welcome. 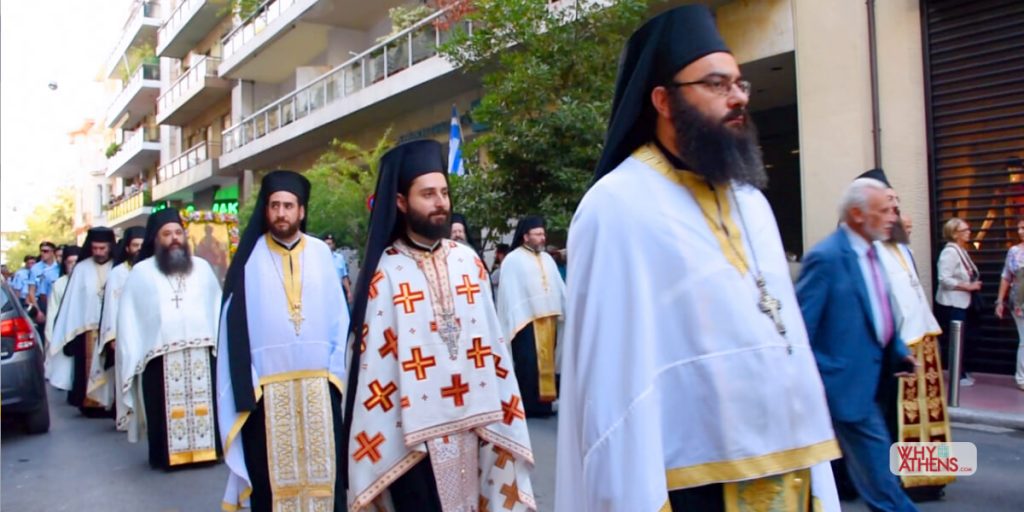 The Greek custom on Annunciation Day is to eat “bakaliaros skordalia”, a delicious fried salted cod with a garlic sauce made of potato and olive oil. Available from food vendors and tavernas throughout Athens.

The Independence Day festivities in Athens start one day prior on the 24th March with the annual student’s parade. School students and other youth associations march through central Athens past Hellenic Parliament in Syntagma, dressed in school uniform and traditional Greek costumes.

The 25th March parade starts at 11:00am however we suggest getting into Syntagma Square by no later than 10:00am to secure a good position.

The Acropolis Museum provides free entry on the 25th March in celebration of Greek Independence Day and will be open until 8:00pm.

For the taxi driver: Πλατεία Συντάγματος