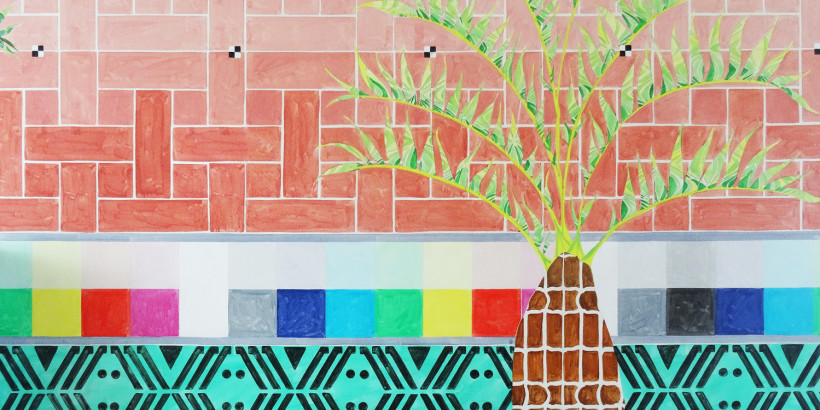 Painted mural by Navine Khan-Dossos. Photograph: courtesy of Benaki Museum
Where: Benaki Museum of Islamic Art
When: On now – 25th September 2016
Why Go: An artistic look at where Athens stands between the West & the Islamic worlds today

British artist Navine Khan-Dossos explores the complex relationship between the West and the Islamic world. During Turkish occupation, urban legend recalls how the palm tree once flourished in Athens but was later slowly eradicated following Greek independence and as a way for the city to be seen as more European.

The story captivated the artist and formed the basis of her latest work ‘Imagine a Palm Tree,’ a floor-to-ceiling painted mural on the top floor of the Benaki Museum of Islamic Art. The space will also be used for a series of parallel events throughout the spring and summer in Athens. The artist commenced a crowd funding campaign last year to raise funds for materials and to also finance the parallel events in association with her artwork.

Navine G Khan-Dossos (b. 1982) is a visual artist based in Athens. One of the preoccupations of her practice is the complex relationship between Islam and the West. Her interests include Orientalism in the digital realm and geometry as information and decoration. Khan-Dossos studied History of Art at Cambridge University, Arabic at Kuwait University, Islamic Art at the Prince’s School of Traditional Art in London, and holds an MA in Fine Art from Chelsea College of Art & Design, London.

A discussion between the artist Navine G. Khan-Dossos and Mina Moraitou, curator of the Benaki Museum of Islamic Art

Α Talk by Nikos Thymakis from the Hellenic Palm Tree Society on the palm trees in Athens, ‘What is the Greek Palm?’

A talk by artist and writer James Brida on the subject, ‘Trees, Technology and the Olympic Games’