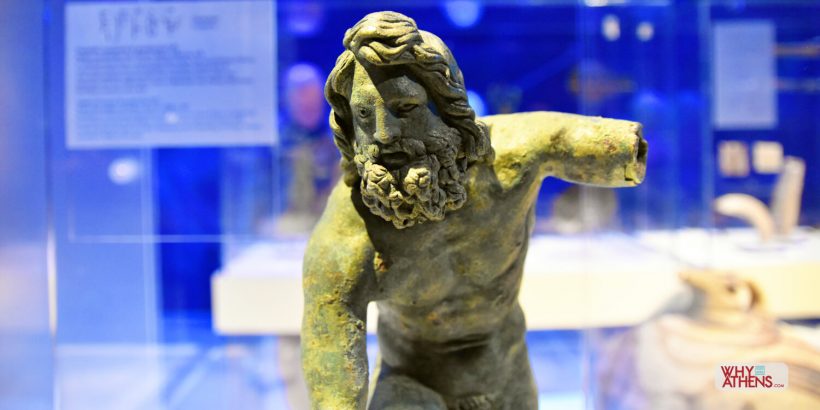 Where: National Archaeological Museum
When: On now - 24th March 2018
Why Go: To see a visual narration of mankind’s odyssey through time

The National Archaeological Museum (NAM) is a treasure trove filled with precious remnants of the past. As a publicly funded institution in the midst of hard economic times, what the museum lacks in cosmetic finesse, it makes up for with its impressive permanent collection of more than 11,000 pieces, dating as far back to the Neolithic period.

Greeks have mastered the art of symbolism (also derived from the Greek word symbolon, σύμβολον) and none more so than at the NAM, where the curator has thoughtfully threaded together iconic pieces representing a passage through time in its latest exhibition, Odysseys a tribute to the museum’s 150 year anniversary.

Through seven separate gallery points, stories of conquests, exploration, and the desire to overcome immortality is weaved together into one narrative; the personal and collective endeavours of mankind. The exhibition is a reminder that love, fragility and mortality always transverses time, to define what makes us human after all. 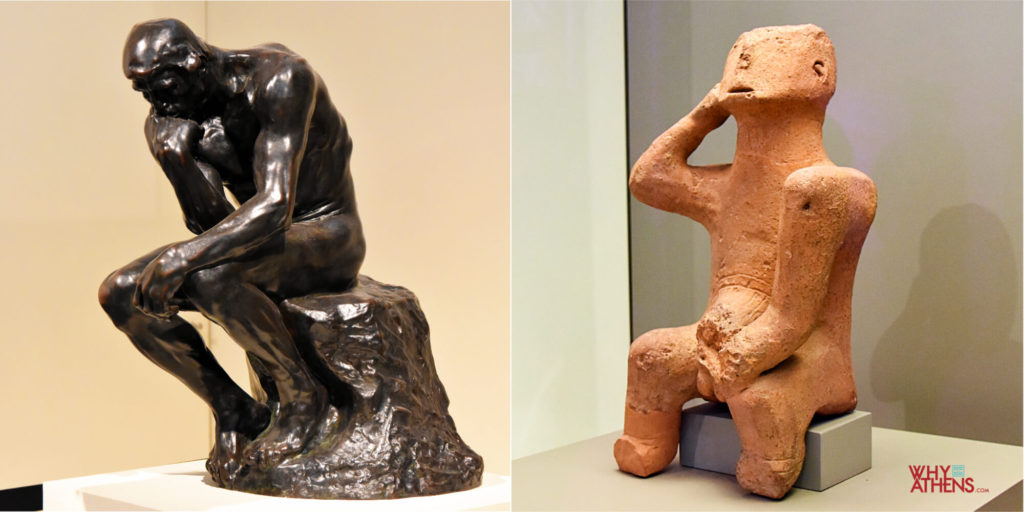 Left: ‘The Thinker’ by Rodin conceived in 1881-1882. Right: The primordial ‘Ponderer’ from Thessaly. Photograph: Why Athens | Odysseys National Archaeological Museum

On loan from Tokyo’s National Museum of Western Art, ‘The Thinker’ by Auguste Rodin was the precursor to his famous larger sculptural work. Created in bronze it sits next to the 6000-year-old neolithic version (in clay) of a man pondering, rendered by an anonymous craftsman of Thessaly. Both bring their right hand to the head in what has now become the famous gesture of thought and introspection.

Why Athens Tip: The Thinker by Rodin was returned to Japan on the 3rd April 2017 and no longer on display but the primordial ‘Ponderer’ remains on display at the museum. 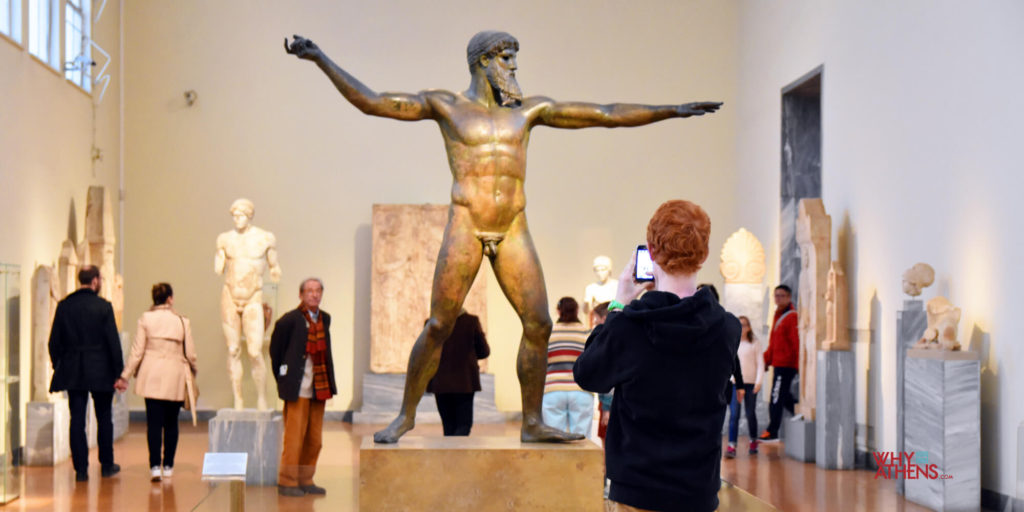 This bronze statue was retrieved from the bottom of the sea in 1928 off the cape of Artemisia (northern Evia). An intellectual debate continues whether it depicts Poseidon, god and master of the sea or of Zeus (originally) holding a thunderbolt. 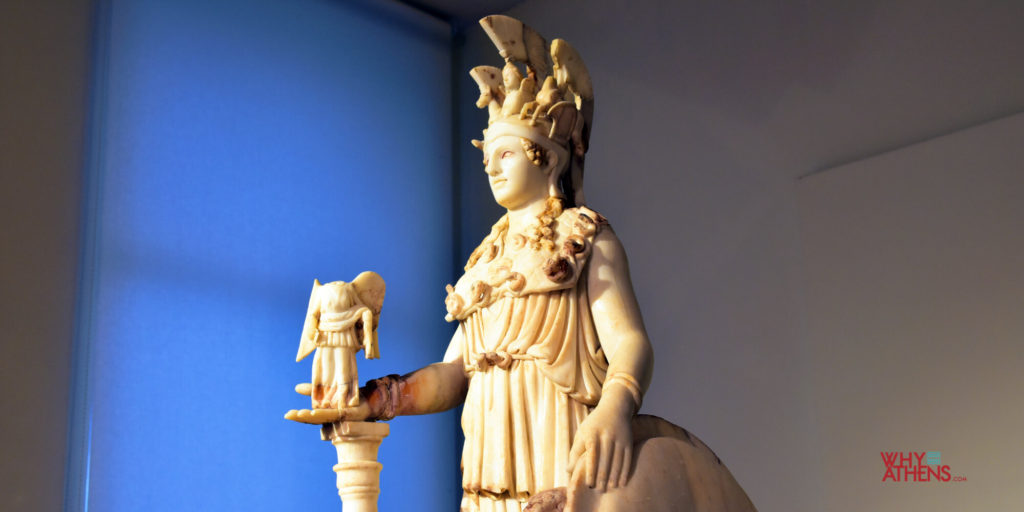 Athenian master sculptor Pheidias created the original cult statue of Athena for the Parthenon in 438BC. As one of the best preserved copies, this version of Athena the Virgin, was discovered near the Varvakeion School. Its naked body is made of ivory with the rest of the statue originally laced with gold leaf (circa, first half century 2nd AD). Athena is depicted here with the various epithets or attributes she was worshiped for; “Promachos” and “Polias” – as a leader in battle and protector of the city, “Nike” for the victory that she brings and “Ergani” as a patron of the arts. Beyond the goddess Athena, the statue also represents the virtues of Athens itself at a time when the city was flourishing. 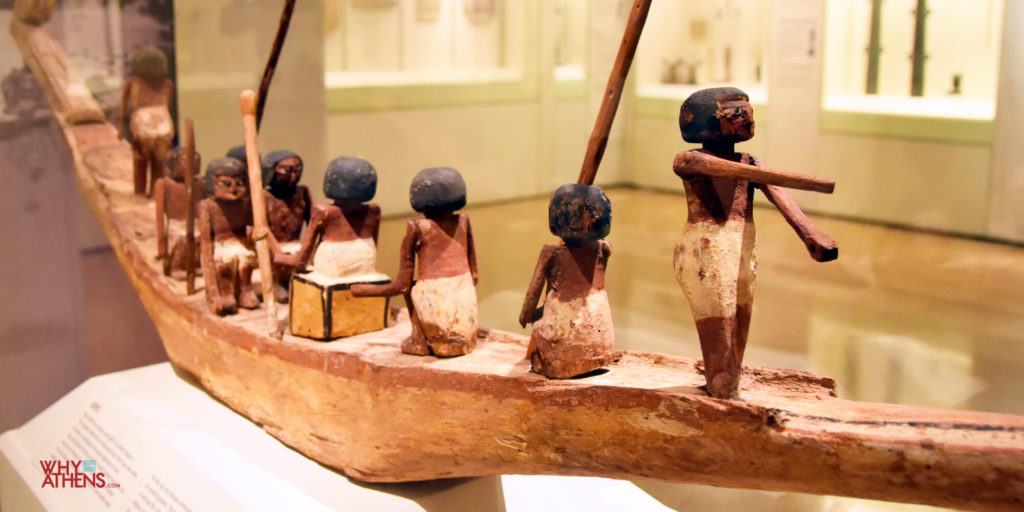 A wooden funerary model of a ship with its crew. Photograph: Why Athens | Odysseys National Archaeological Museum

Commercial, diplomatic and cultural ties between Greece and Egypt began from the 3rd millennium and continued on through the expansion of the Hellenistic kingdom (i.e. Alexander the Great and his successors) to create exclusive maritime trade ties. The depiction of this wooden ship represents the odysseys of the Nile associated with commerce. Boat models such as this one were popular grave gifts as Egyptians believed that boats would carry them in the afterlife to the sacred pilgrimage of Osiris. 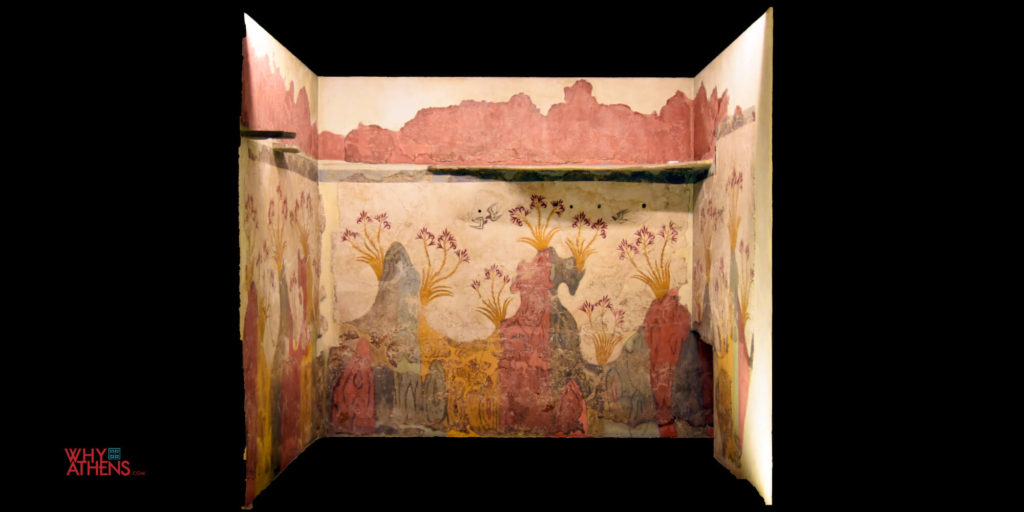 The cycle of life and the endless regeneration of nature can be seen in this painting, which stretched over three walls of a room. It depicts huge lilies in different stages of flowering, believed to originate from Akrotiri, Thera (Santorini). Its origin is distinguished by the freedom in the design and well preserved state thanks to a volcanic ash that inadvertently covered and protected it for centuries. Discovered in August 1970 in a ground floor room that was used for religious purpose. Its subject matter and composition is attributed to the same painter of the ‘Crocus Gatherers’ fresco. 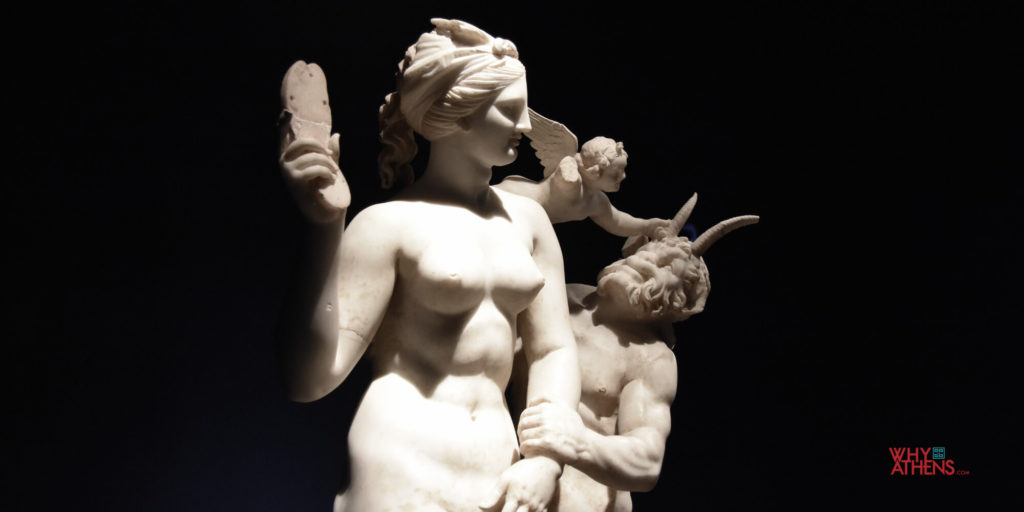 Eros or love was frequently glorified by gods, poets and artists from antiquity to the present day. This group sculpture of Aphrodite, Pan and Eros depicts a naked Aphrodite possibly in a bath, threatening Pan with her sandal. The winged Eros appears as the mediator of this love game which has elements of attraction, grace and beauty. 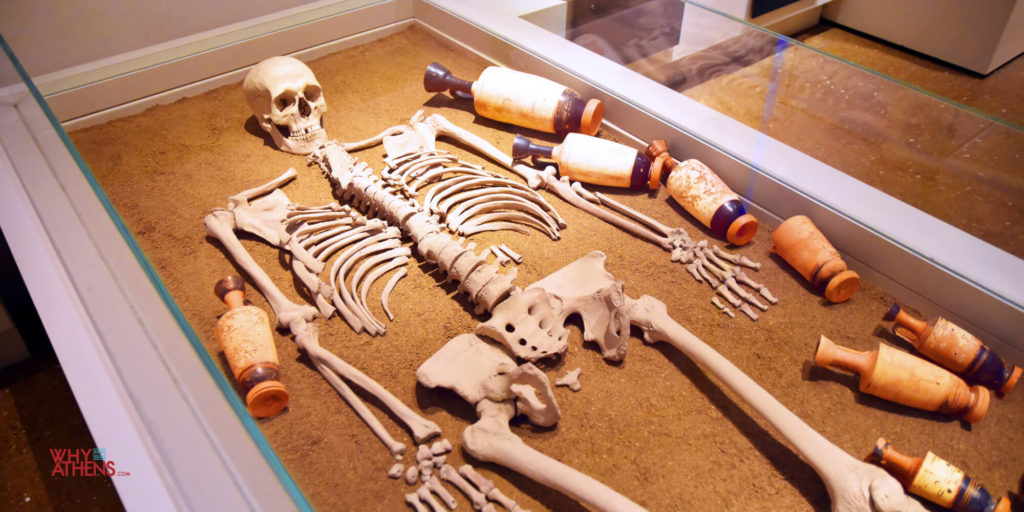 Life and death, the real and the transcendental are represented on small vases placed alongside the dead. Seen here is the exceptionally preserved skeleton dating back to 460BC, found in the ancient burial ground of Kerameikos in central Athens. 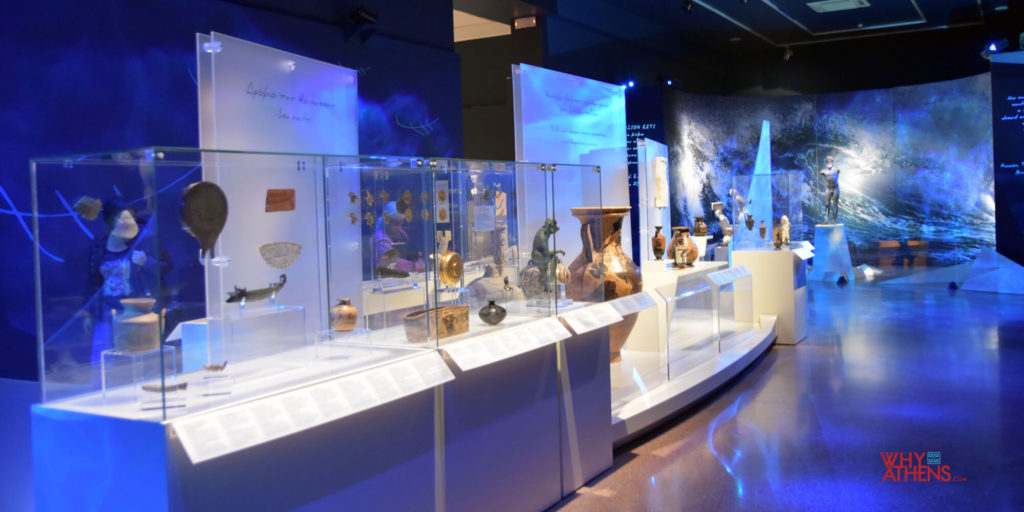 An immersive experience through the ages brought forward to the present day with various multimedia elements. Photograph: Why Athens | Odysseys National Archaeological Museum

More works are thematically displayed together to further explore the notion of a journey inspired by Homer’s famous poem ‘Odyssey’. Lighting, soundtracks and music are used to enhance these themes, from chirping swallows, a symbol of love and rebirth, to the creaking of wooden ships, the start of a new journey. Music provided by the legendary Greek composer Vangelis Papathanassiou (think Chariots of Fire).

ODYSSEYS at the National Archaeological Museum