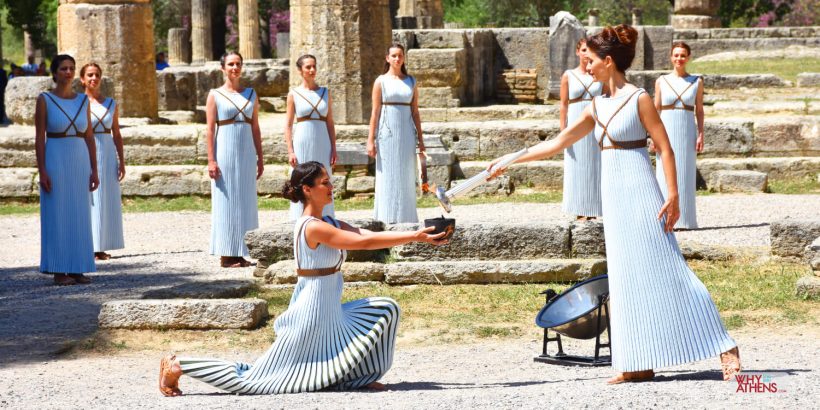 The High Priestess with the Olympic Flame at the Temple of Hera in Olympia. Photograph: Why Athens
Where: Ancient Olympia
When: 12 March 2020 - 11:30am Greek time
Why Go: Witness the start of the Olympic torch relay

The Olympic flame lighting ceremony for the Tokyo Games will take place on 12 March 2020 at 11:30am in Ancient Olympia, home of the ancient Olympic Games in Greece, in an event open to the public and televised live around the world.

At the ancient Temple of Hera, up to 30 priestesses or ‘Caryatids Kores’ will perform a series of rituals, calling on the sun god Apollo to ignite the Olympic flame using the rays of the sun and a parabolic mirror. The fire, which stays lit for the entirety of the Olympic Games period, symbolises purity and represents the values of the Olympics between nations. 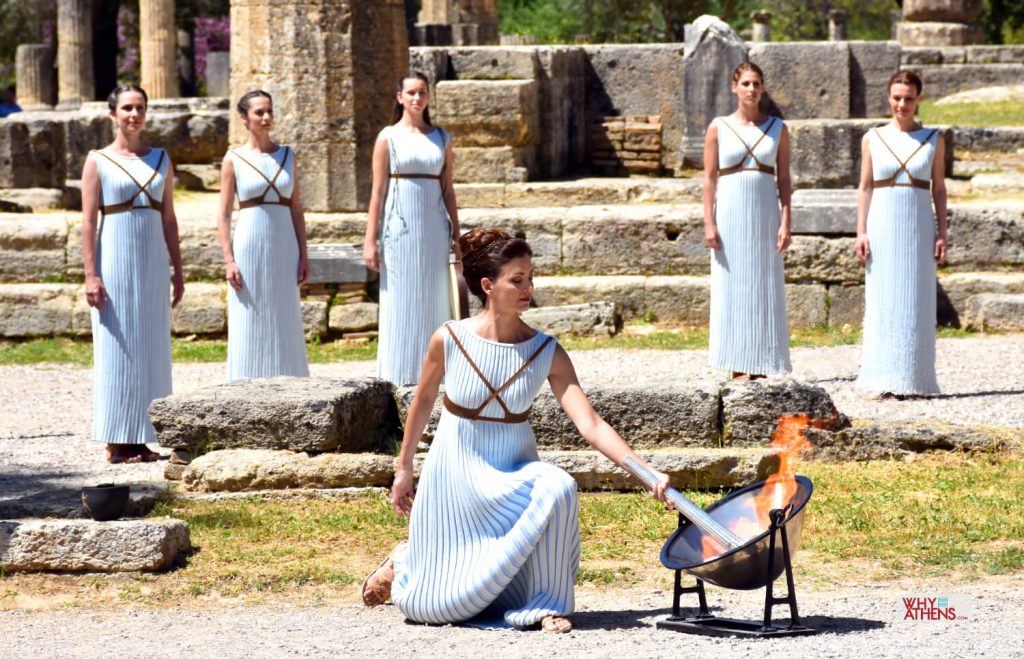 High Priestess Katerina Lehou channels the powers of Apollo as she lights the Olympic flame during the last Olympic lighting ceremony. Photograph: Why Athens

The short lighting ceremony at the Temple of Hera is conducted in front of television cameras and dignitaries before the flame moves to the public area of the site. Here the crowds can expect to see a symbolic and poignant display of peace and hope as the priestesses are accompanied by the male ‘Kouroi’ in a ritual of dance and ceremony to celebrate the occasion lasting around an hour. 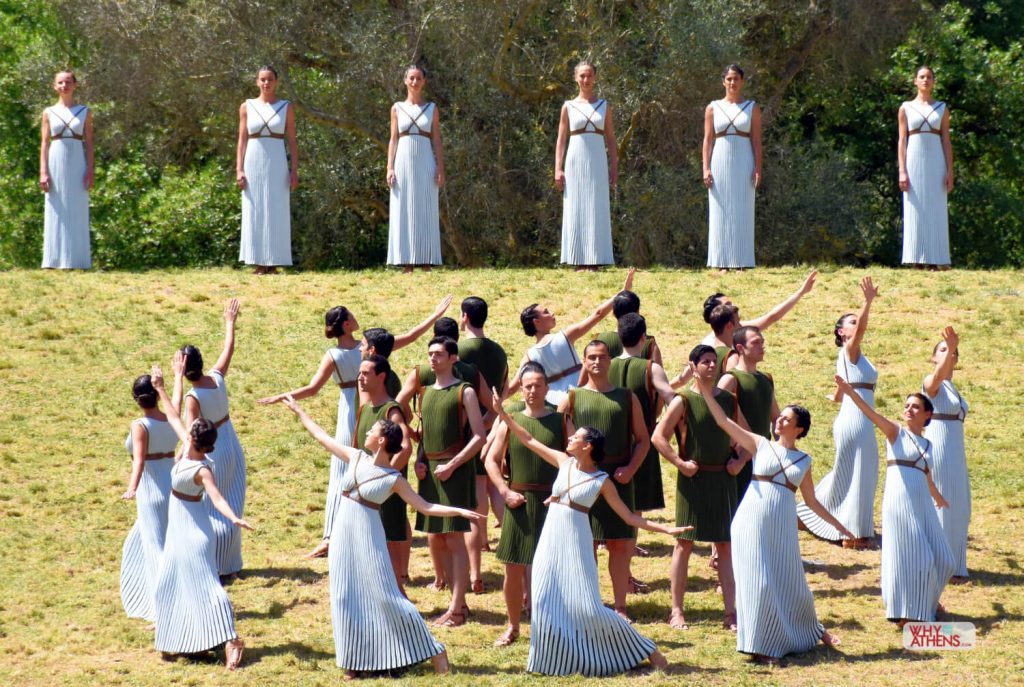 The Kouroi and Priestesses performing at a previous ceremony. Photograph: Why Athens

Speeches are made by officials from the various Olympic committees and at the end of the ceremony, the flame is passed from this year’s high priestess, Ms Xanthi Georgiou onto the first torchbearer, Ms Anna Korakaki, Greek Olympian and 2016 Olympic Gold Medallist, who will launch the torch relay around Greece. 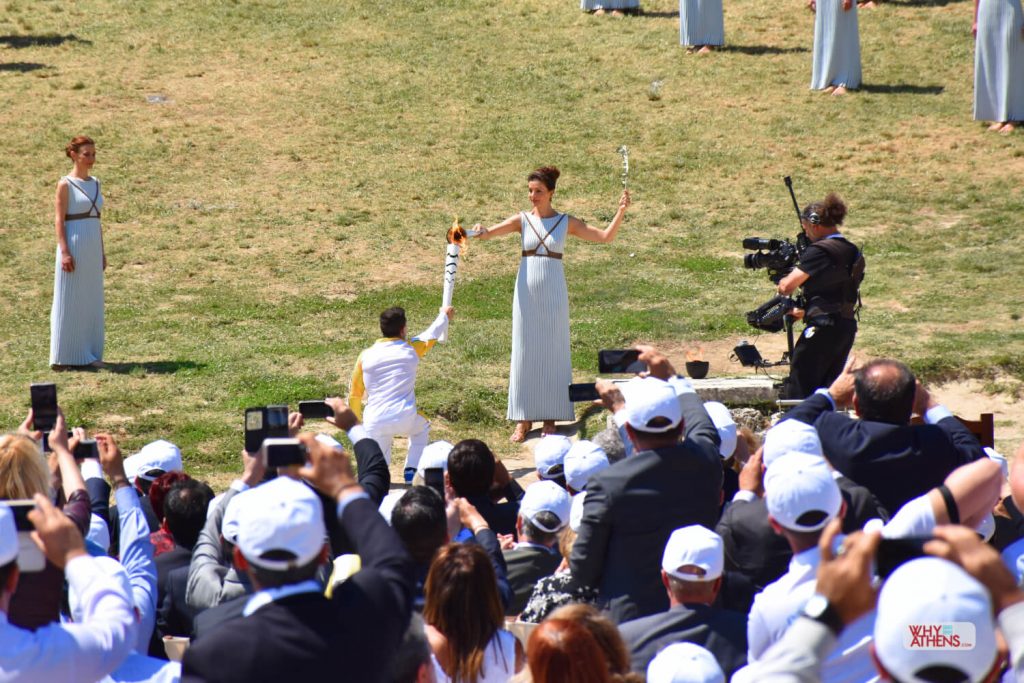 The handover of the flame from the high priestess to the first torchbearer will start the relay toward Tokyo. Photograph: Why Athens

The symbolic light will pass through more than 30 towns and cities around the country before descending onto Athens seven days later. There it will be handed over to host city Tokyo, in a ceremony at the Panathenaic Stadium, home of the first modern Olympic Games in 1896. 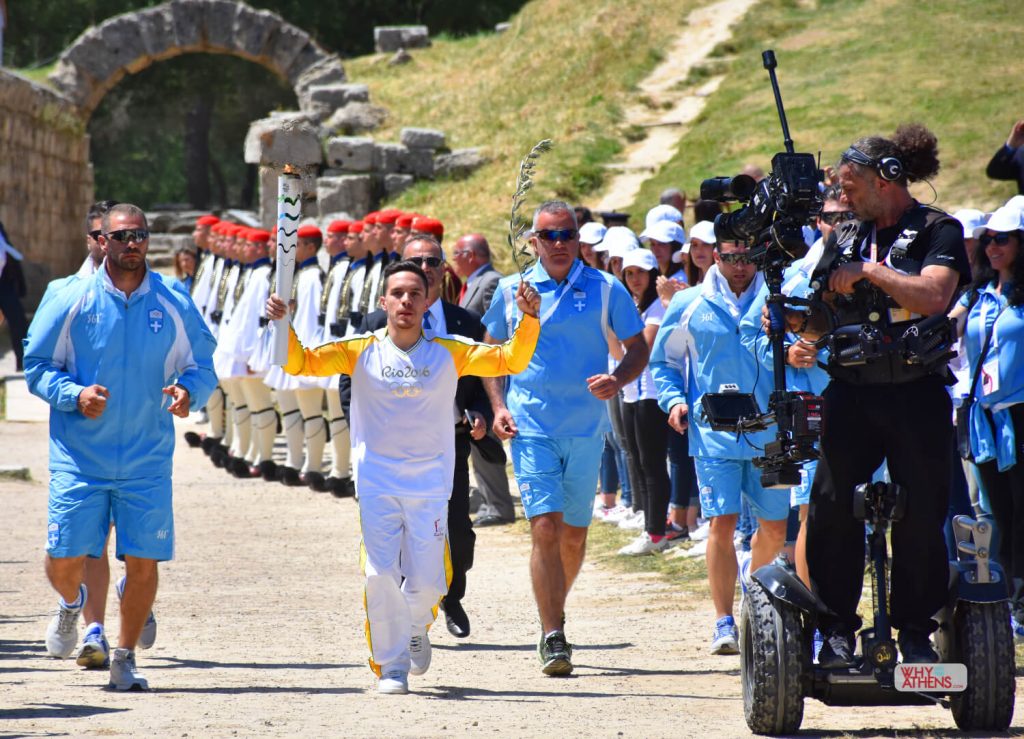 The first torchbearer from the 2016 Olympic Games was cheered on by thousands as he left Ancient Olympia. Photograph: Why Athens

All ages welcome and the event is free to attend with the normal price of admission to the archaeological site.

Public seating is on a sloping grassed area overlooking the ceremonial area.

Picnic blankets or cushions are suggested for comfort. Bring protection from the sun including hat, glasses and sunblock.

Note that there is a dress rehearsal for the entire ceremony on the day before the official lighting where the public is able to witness the flame being lit on the parabolic mirror. The dress rehearsal will take place at approximately the same time as the actual ceremony. **Update as at 5 March 2020, the dress rehearsal on 11 March will not be open to the public due to precautions for the Coronavirus.

Start time is 11:30am EET (Greek time) however we suggest arriving at Ancient Olympia by 10:00am in order to navigate the crowds and enter the venue to find a position.

Ancient Olympia is approximately a three-hour drive from central Athens.