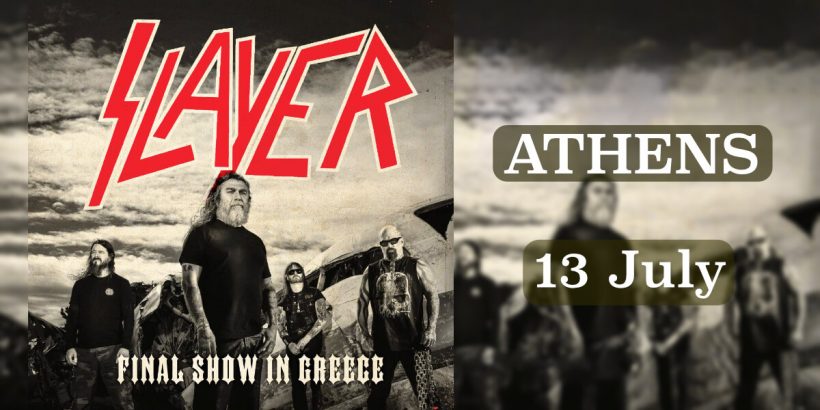 Where: Apostolos Leoforos Alexandras Stadium
When: 13 July 2019
Why Go: See the band one last time

American thrash metal band Slayer will perform the closing show to the inaugural Athens Rocks Festival in July 2019 as part of their final world tour.

Slayer’s fast and aggressive musical style made them one of the founding “big four” bands of the thrash metal genre alongside Metallica, Megadeth and Anthrax. Its current members include Kerry King, Paul Bostaph, Gary Holt and Tom Araya.

“Reign in Blood,” released in 1986, was featured as the most “hard” album of all time, earning the band a reputation around the world. The record is still included in the list of the best heavy metal albums.

In May 2013 the bands guitarist and songwriter, Jeff Hanneman, passed away, immersing the band in grief. It wasn’t long after that the band announced their retirement on social media;

“Playing the most aggressive music that could be created with nearly 3,000 concerts around the world, winning countless awards, making hundreds of covers and unfortunately experiencing the loss of one of our founding members (guitarist Jeff Hanneman ), the season of Slayer, one of the biggest thrash / metal / punk groups of all time, is coming to an end”.

Don’t miss the chance to say goodbye Slayer, one last time in Athens.

The historic Athens stadium, ‘Apostolos Leoforos Alexandras’ in central Athens is back on the concert map after a brief hiatus. The grounds have seen legendary performances by David Bowie, Alice Cooper, Van Morrison, Black Sabbath, Deep Purple, Santana, Bob Dylan and more playing a catalytic role in the spread of the international live music experience in Greece.