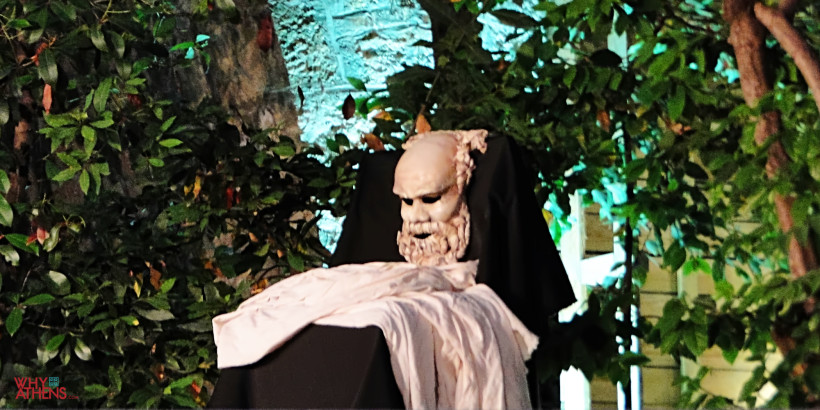 Socrates stands trial on stage in Athens. Photograph: Why Athens
Where: Athens University History Museum
When: 1-3, 6-10, 13-17, 20-24, July 2016
Why Go: To hear the timeless text of a great Athenian philosopher in a magical outdoor setting

The Elliniko Theatro presents Socrates Now, directed and performed by Emmy award winner Yannis Simonides. Based on The Apology of Socrates by Plato, this 80-minute soliloquy narrates Socrates’ famous trial upon which the philosopher was accused of religious nonconformity and the corruption of youth. The virtuous Socrates pleads guilty and is sentenced to death. The Socratic ethics are captured throughout the performance, as the philosopher not only reviews the motives and charges against him, but speaks of the death and immortality of the human soul. Simonides’ solo performance of Plato’s work, indicates the timelessness of the text by encouraging audiences to consider their own critical thinking in today’s world. The enactment is staged in the magical outdoor space of the Athens University History Museum, an 18th century building that is situated beneath the imposing heights of the Acropolis with panoramic views of Plaka, the Ancient Agora, the Athens Observatory and Lycabettus Hill. Elliniko Theatro is an international performing arts organisation founded in 1979 based in New York and Athens. Socrates Now premiered in New York in 2004 and has since then performed with great success at the United Nations, the Athens Ancient Agora, the NBC Today Show, and in over 350 theatres, festivals and educational institutions in 17 countries worldwide. Top universities such as Yale, Columbia, Cornell, Michigan, Cambridge, Oxford, Edinburgh, and Northwestern have hosted interactive seminars on Socratics ethics and their role to today’s society, based on Yannis Simonides’ performance.

The Apology of Socrates (399BC) is one of four works including, Euthyphro, Phaedo and Crito through which Plato details the final days of the philosopher Socrates.

* In English with Greek subtitles.