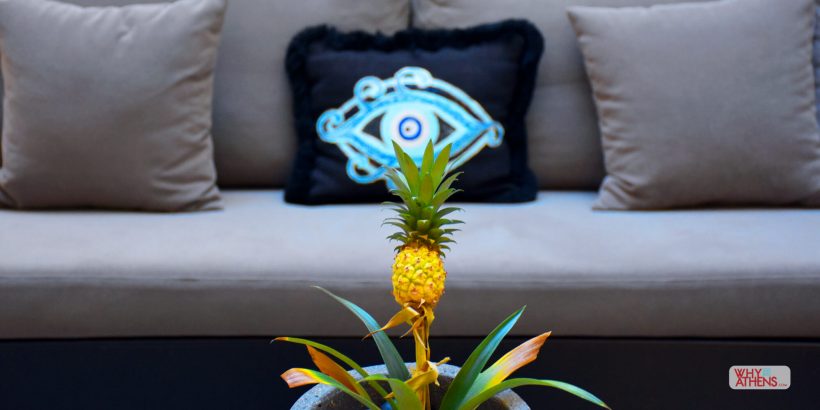 Quirky interiors at Inn Athens. Photograph: Why Athens
Where: Short walk to Syntagma Square
Why Stay: Boutique service in the heart of Syntagma
We Loved: The private atrium that feels removed from the city

InnAthens is an oasis of calm despite being located in one of the most central locations in the city. Set back from the road, the hotel is accessible via the historic arcade of ‘Stoa Ralli’ featuring 22 guest rooms that resemble French style ‘maisonettes’. The hotel wraps around a central atrium making it feel like you’ve arrived to an ancient Roman villa and is perfect for enjoying the beautiful Athenian weather. 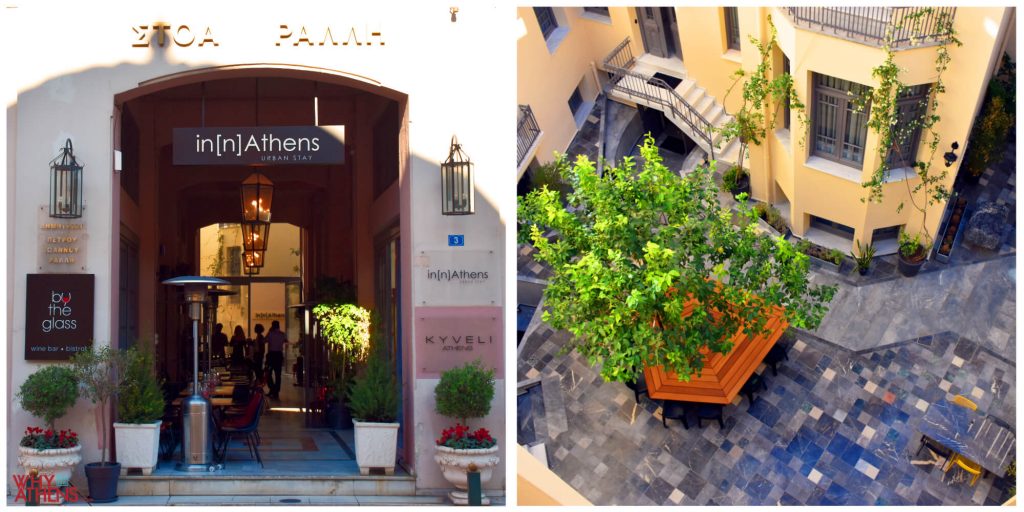 The Inn Athens Hotel entrance and atrium. Photograph: Why Athens

Most of Athens’ major attractions are within walking distance including the Acropolis Museum and Plaka with the cosmopolitan suburb of Kolonaki a stones throw away for great shopping, fashionable bars and restaurants.

Following a nine-month refurbishment, the 100-year old neo-classical building was thoughtfully converted from offices (and formerly a girls boarding school) to an architectural delight of old meets new, although the facade has held onto its neo-classical heritage. The interior is modern and sleek with a minimalist design and industrial accents both in the hotel’s common areas and the guest rooms. Warm hues of wood compliment its minimalist style and prevent it from becoming stark. 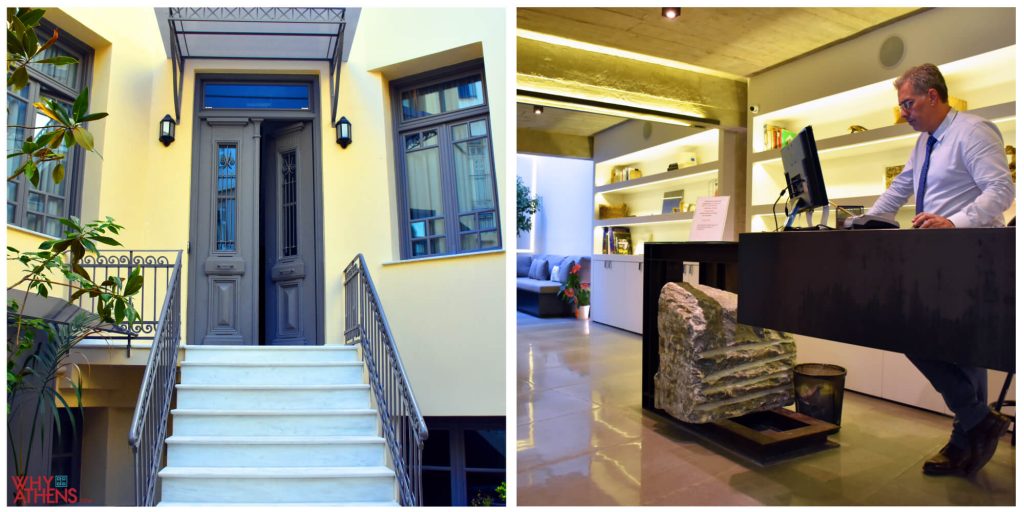 The Inn Athens Hotel has combined the sites architectural heritage with minimalist interiors. Photograph: Why Athens

The guest rooms at InnAthens

Space and function has been well conceived in each of the 22 rooms, with wall mounted televisions and built-in workbenches. Marbled bathrooms provide that touch of luxury with vanities carved out of raw Athenian stone, tying in nicely with the city’s heritage. 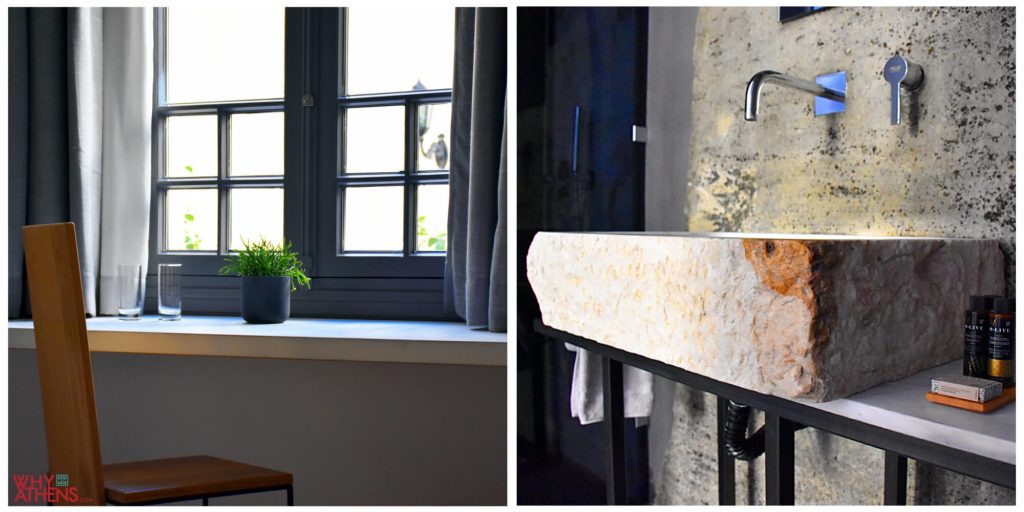 Room detail of the Inn Athens Hotel. Photograph: Why Athens

The ‘Classic’ and ‘Deluxe’ rooms offer generous space at 20 square metres, with the Deluxe fitted with balconnettes. The rooms at the rear of the hotel have city views and the front facing rooms overlook the atrium. Suites start at 30 square metres and can be converted to sleep up to four people. All rooms are fitted with Coco-Mat mattresses and linens for a luxurious sleep. The hotel prides itself as being non-smoking and is one of the few to do so in Athens. 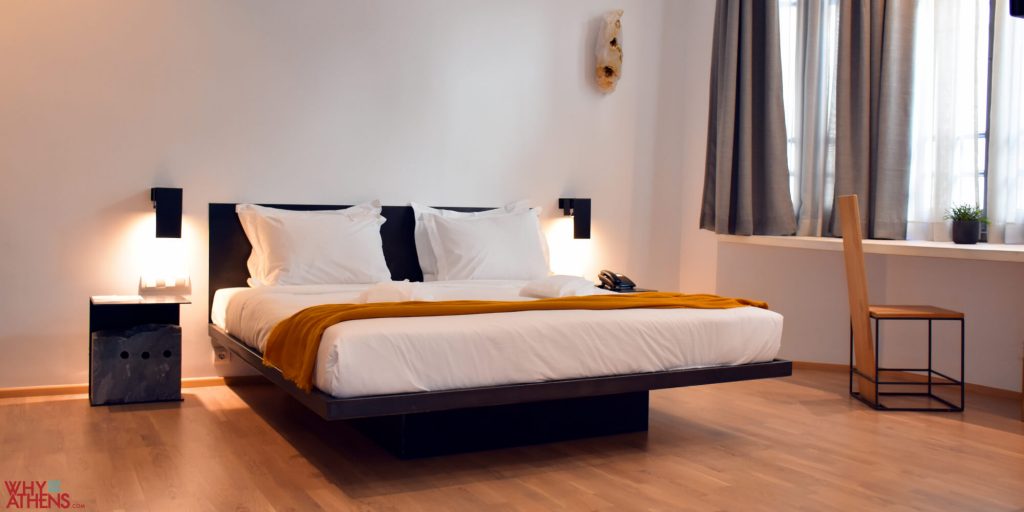 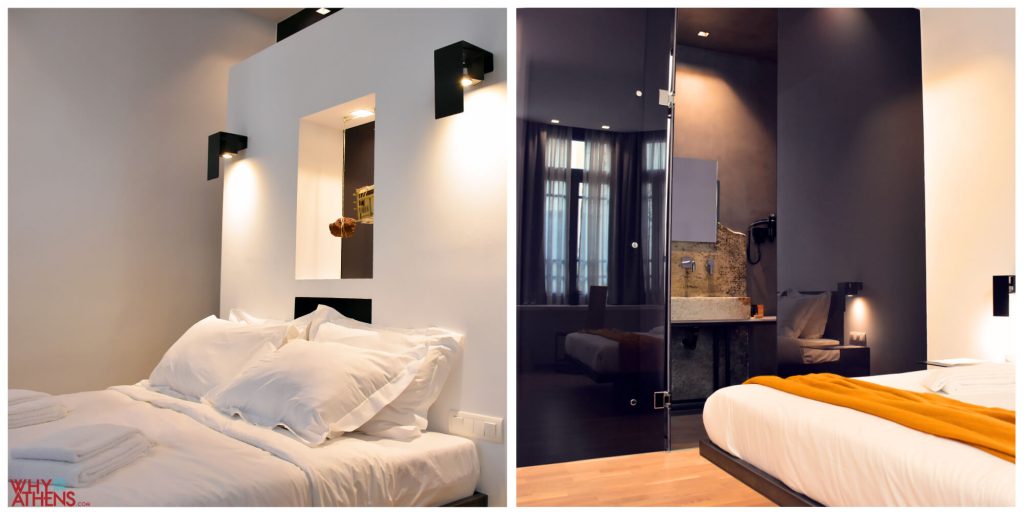 The guest rooms are spacious and feature Coco-Mat beds. Photograph: Why Athens

A traditional Greek breakfast is served daily on the ground floor or in the atrium. Lunch, dinner and a room service menu is catered from ‘By the Glass,’ a hip wine bar and restaurant that is located within the entrance arcade to the hotel. Open seven days until late, it attracts local wine buffs and foodies. 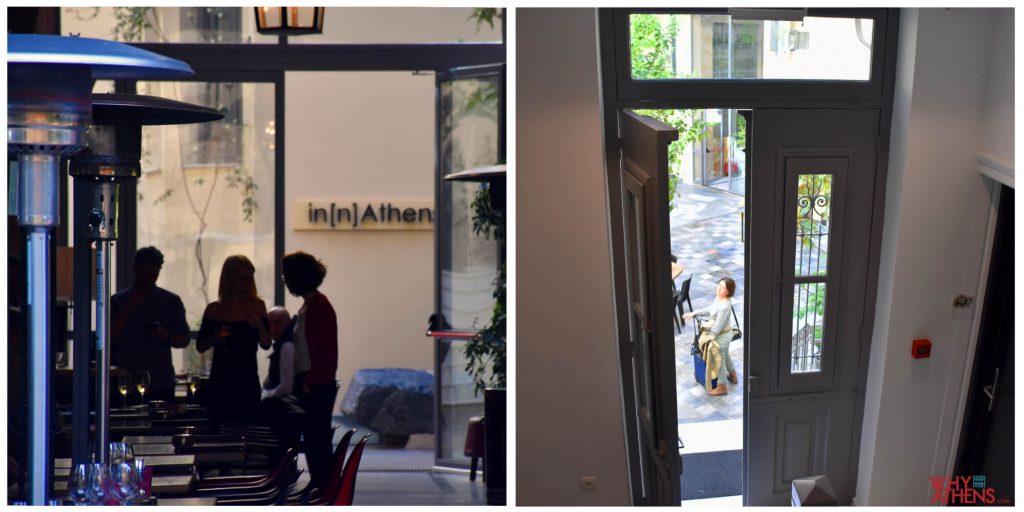 The wine bar and restaurant at the hotels entrance. Photograph: Why Athens

As an owner-operated hotel, you will receive personalised service with a great deal of care and attention. The hotel never feels overrun, in fact after a few days you will start to feel part of a small and intimate community that share a very special secret. And the secret of course is that there is a place that provides a bijou escape to rest your head after a day exploring Athens. 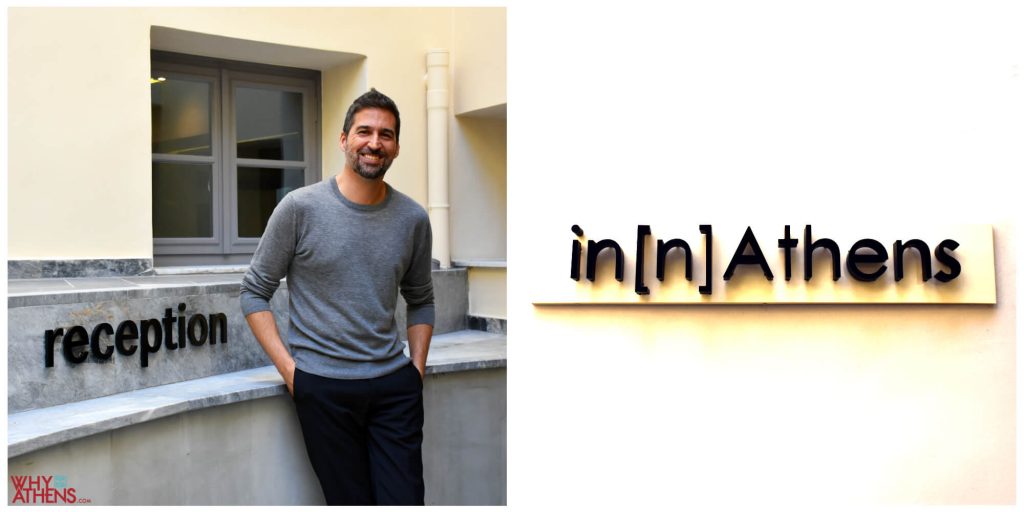 We would like to thank the management at In(n) Athens for their assistance and hospitality. This post was not sponsored in any way and as always, all opinions are our own. 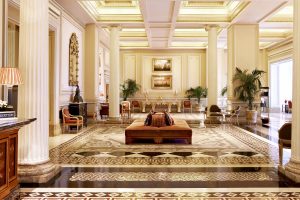 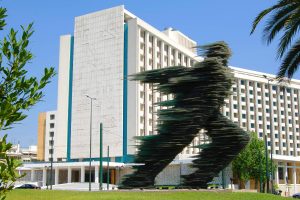 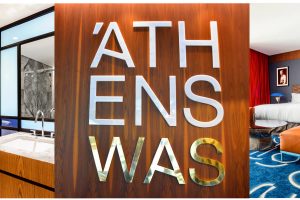