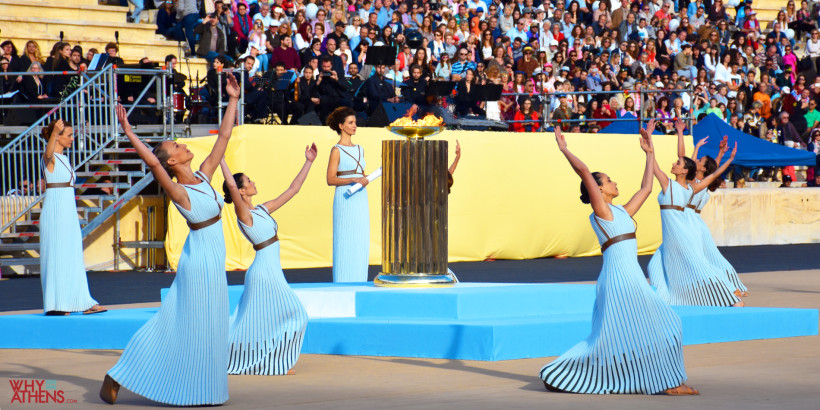 The Olympic flame reaches its final destination in Greece before departing for Brazil. Photograph: Why Athens

The Olympic flame completed a successful tour around Greece, covering more than 2000 kilometres before its final handover to the Brazilians at the Panathenaic Stadium in Athens, the site of the first modern Olympic games.

It began at the ancient temple of Hera in Olympia where 30 priestesses or ‘Caryatids Kores’ performed a series of rituals, calling on Apollo to light the cauldron. The High Priestess conducts the ceremony at the ancient temple of Hera. Photograph: Why Athens

The flame was passed onto first torchbearer, Lefteris Petrounias, world champion in artistic gymnastics, who launched the torch relay around Greece. The symbolic light passed through more than 25 towns and cities around the country before descending onto the capital. It was the flame’s visit to Eleonas, a suburb of Athens with a mass refugee reception centre that reminded us of the true spirit of the games, which is this year very much about inclusiveness and world solidarity in the face of a European humanitarian crisis.

“We are here today to show our support and appreciation for everything Greece has done in a difficult time for the whole world. We are also here to express solidarity to the refugees who suffer and this is an emotional visit for all of us.” Ibrahim Al Hussein carries the Olympic Torch for all refugees in Eleonas. Photograph: Courtesy of HOC

Earlier this year, the International Olympic Committee announced its creation of a team of up to ten refugee Olympic athletes, that will march behind the Olympic flag at the opening ceremony in Rio de Jeneiro on the 5th August.

Following Eleonas, the torch relay ascended up to the Parthenon at the ancient city of Acropolis ahead of its official handover to Rio. It was a scene that invoked a sense of divinity that was seen a week earlier at the temple of Hera in Olympia. The light arrived in the hands of triple weightlifting gold medalist Pyrros Dimas who proudly held the torch beneath the towering temples of the Acropolis, that have witnessed similar rituals over thousands of years. Pyrros Dimas holds the Olympic Torch at the Acropolis. Photograph: Courtesy of HOC

Following a thorough tour of the country, the Olympic flame had been well baptised and ready for its official send off to Rio. World rowing champion Katerina Nikolaidou became the last torchbearer, lighting the cauldron in the Panathenaic Stadium in front of thousands of spectators and Olympic officials. Ibrahim Al Hussein was there too, reminding us again of the power of friendship and unity. World rowing champion Katerina Nikolaidou has the honour of being the last torch bearer. Photograph: Why Athens

The light was received by the President of the Rio 2016 Organizing Committee, Carlos Nuzman who said,

“Excitement is building in Brazil and will build even more as the torch relay lights up all parts of the country. (Those) who will carry the flame will share it from hand to hand, energising our young people, uniting our communities and showcase the timeless power of the games to create a better world.”

It was a ceremony steeped with heritage and tradition. The Presidential Guards paved the way for the arrival of the President of the Hellenic Republic, Mr. Prokopios Pavlopoulos. The Presidential Guards await the arrival of the Greek President. Photograph: Why Athens

Young men or ‘Kouroi’ were dressed in olive green robes that made a striking contrast against the white marble of the stadium. The Kouroi accompanied the 30 priestesses who performed a graceful dance in front of the lit cauldron that was a temporary farewell until its return later this year. The Kouroi and priestesses perform at the ceremony. Photograph: Why Athens

The Rio Olympic flame will visit 329 towns and cities, including all of Brazil’s 26 state capitals. 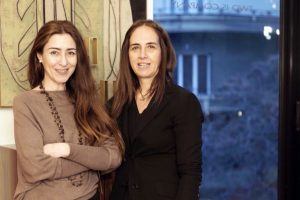 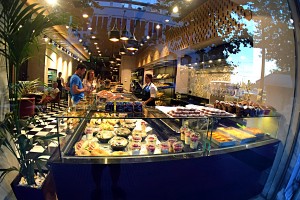 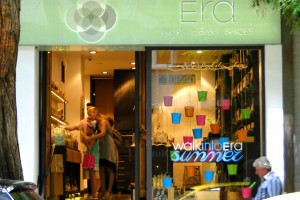